Yeerk Pool is an Animorphs arcade-style game, offered on the official Animorphs website. On a PC, Windows 3.1 or 95 is required, and on a Mac the Classic environment (OS 9) is required to run the game and unzip the .sit file.

Jake has infiltrated the Yeerk Pool and now must escape alive!

My name is Jake. That's my first name. I can't tell you my last name. It would be too dangerous. The Controllers are everywhere. Everywhere.

We can't tell you who we are. Or where we live. It's too risky, and we've got to be careful. The thing you should know is that everyone is in really big trouble. Yeah. Even you.

Your challenge is to help Jake find his way through the maze to the Yeerk Pool. You can control Jake's movements with the arrow keys on your keyboard, or with the J-I-K-L keys.

As you find the colored keys, use them to free the gorillas from their matching-colored cages. Once you've released a gorilla, you can use its morph (by hitting the space bar) to help Jake chase off the controllers...but remember, you can only stay in the gorilla morph a limited time.

If you encounter any animals along the way, be sure to stop and collect them for extra points.

You have three chances to help Jake collect all the keys and release all the animals, which then allows Jake entry to the Yeerk Pool area, where you must help him find the Kandrona ray machine that feeds the Yeerks and destroy it. Warning: don't forget to stay away from any roaming Yeerk slugs and use Jake's gorilla morph (by hitting the space bar) to cross the Yeerk Pool.

At the end of the game, your points will be tallied, and you can proceed to the next level. Your game ends when you either run out of time or after you've exhausted all three Jakes. Play again to beat your score!

The game starts with Level 1, where the player is given 3 lives to play as Jake and must capture four keys (blue, green, red, and yellow) and use those keys to unlock the cages of four gorillas, while avoiding losing lives by running into a Controller.

The player controls Jake with the arrow or J-I-K-L keys and guides him through a maze. The player can only see part of the maze (about a fourth) at any given time. Jake must reach his goals and avoid being captured by Controllers who patrol the pool. He may morph to defend himself, but he has a limited number of morphs per level.

After passing Level 1, the player goes to a new area that is not a maze. Here, Jake must avoid Yeerks and capture the Kandrona. After this, the player moves on to Level 2, which is a maze just like level 1 and has similar goals and gameplay, but this time there are two Controllers to avoid instead of one.

The player as Jake at the start of the game, with three lives

Jake being chase by a Controller

Yellow key has been picked up 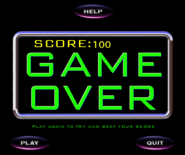 All four keys picked up, and 3 out of 4 gorillas freed

All four keys picked up, gorilla in yellow cage to be freed

All gorillas freed, get ready for the Yeerk Pool 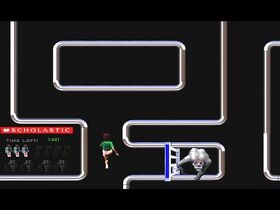