"Visser One. In a morph I hadn't seen since all of this first began. Eight fire-breathing heads. Legs thick as trees. Serpentine necks. Eyes like gobs of molten lava."
―Jake[src]

This creature has eight legs, eight arms ending in three-fingered claws, eight heads, and spits fire from its heads. Visser Three morphs this during a battle at the Yeerk Pool in The Invasion. He acquired the morph on the fourth moon of the second planet of a dying star. Visser Three, who usually doesn't repeat battle morphs, morphs this creature only once more, during a battle in The Resistance.

"From Visser Three's Andalite body, the creature grew. Tall as a tree, towering over even Rachel. Eight massive legs. Eight long, spindly arms, each ending in a three-fingered claw. And from the place where the top set of arms grew came the heads. Heads. Plural. Eight of them. This creature had a thing for the number eight. Even the Hork-Bajir-Controllers backed away. Even they didn't want to be near Visser Three when he morphed this way. [...] From one of the heads a round, spinning ball of flame erupted. A ball of flame that flew like a missile."
―Jake[src]

Animorphs: The Invasion Game and other games

This creature is illustrated and used as a gamepiece to represent Visser Three. There is also a card with the same illustration. 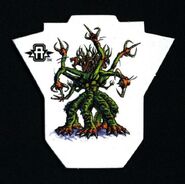 One of the Animorphs Jigsaw Puzzles features an illustration of the scene in The Invasion where Jake in tiger morph is fighting Visser Three morphed as the eight-headed creature in the Yeerk Pool.

Illustration of this creature on a Russian animorphs poster

The creature as portrayed in the graphic novel