Ellen Geroux (based on an outline by K.A. Applegate)

"Visser One has returned to Earth. But for a grim purpose. She is being held at the Yeerk pool. She is to be executed as a traitor. [...] From what I understand, death as a traitor means death by Kandrona starvation. The event awaits only the necessary witness from the Council of Thirteen, who will arrive in two days. Visser Three will then be elevated to the post of Visser One. And, there are rumors — nothing concrete, but suggestions — that the execution of Visser One is part of an overall change affecting Earth."
―Ax to Peter and the Animorphs[src]

The Revelation, published in August 2000 and written by Ellen Geroux based on an outline by K.A. Applegate, is the forty-fifth book in the Animorphs series. It is the fourteenth book narrated by Marco and the ninth book with Marco as the sole narrator.

Things were already really weird. Fighting aliens. Battling to have Earth. And still trying to be normal. Marco, the other Animorphs, and Ax are almost used to it. But things are changing. The Yeerk invasion of Earth started out passively. Secretly. But now, everything seems to be stepped up. Even Marco's father is talking about some top secret project at his job. Something about developing Zero-space...

Marco doesn't even know whether his father is a Controller. But he does know he's not going to let the Yeerks win this one. They've already got his mother. And Marco will do anything it takes to save his father. Anything...

Ad from inside book 44
Add a photo to this gallery

Norwegian cover
Add a photo to this gallery 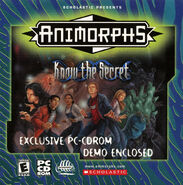 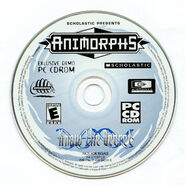 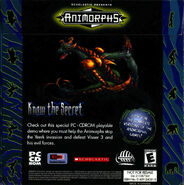 Know the Secret Demo CD (back)
Add a photo to this gallery
Retrieved from "https://animorphs.fandom.com/wiki/The_Revelation?oldid=24845"
Community content is available under CC-BY-SA unless otherwise noted.