Melinda Metz (based on an outline by K.A. Applegate)

"I want to be sure, daughter of Prince Seerow, that you realize you have only one function to perform. As soon as you show us the location of the weapons your Ixcila will be returned to storage. You are dead, Aldrea-Iskillion-Falan. When you have performed this one duty, this illusion of life will be ended and Cassie will be Cassie alone."
―Ax[src]

The Prophecy, published in September 1999 and written by Melinda Metz based on an outline by K.A. Applegate, is the thirty-fourth book in the Animorphs series. It is the tenth book narrated by Cassie and the second narrated by Aldrea-Iskillion-Falan.

There is a chance for the free Hork-Bajir on Earth to start their own rebellion against the Yeerks. They have the numbers, but they don't have the weapons. And they've learned from the last surviving Arn -- the race that created the Hork-Bajir -- that Aldrea, daughter of Prince Seerow, knew the location of a stolen Yeerk vessel.

Unfortunately, the only way to recover the ship is to ask Aldrea herself -- and she's dead. But the Arn has Aldrea's persona stored. And Cassie, Rachel, or Toby Hamee are the closest match. The only problem is that once Aldrea gets into one of their minds, she may not want to come out...

Back cover of the Scholastic edition

Cassie from the cover morph 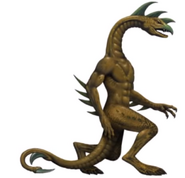 Hork-Bajir from the cover morph

Ad from inside Book 33
Add a photo to this gallery

Norwegian cover
Add a photo to this gallery
Retrieved from "https://animorphs.fandom.com/wiki/The_Prophecy?oldid=25682"
Community content is available under CC-BY-SA unless otherwise noted.