"Someone has come around asking about you."
"What do you mean, someone is asking about me?"
"Some lawyer. He says he was your father's lawyer. And he's also representing some woman. She says her name is Aria. She says she's your cousin." [...]
"My father's lawyer. And some woman named Aria who is supposedly my cousin. It's a trap. Someone has figured out who I am."
―Rachel and Tobias[src]

The Pretender, published in October 1998 and written by K.A. Applegate, is the twenty-third book in the Animorphs series. It is the sixth book narrated by Tobias and the third book with Tobias as the sole narrator.

Someone's looking for Tobias. Someone who says she's his long-lost cousin. Tobias isn't sure the person is telling the truth. But she's really nice, and knows a lot about him. And what she tells Tobias definitely gets his attention.

It seems a lawyer has discovered Tobias's father's last will and testament. So, Tobias needs to attend the reading. His "cousin" even offers to go along. But something just doesn't feel quite right. That's when Tobias, the other Animorphs, and Ax decide to do a little checking on this "cousin." And what they discover will change the rest of Tobias's life...

Tobias has been having bad luck on his hunts; every time he'd dive on the rabbit litter to pick off a hapless youngster, he'd suddenly envision himself as the prey with the shadow of death swooping at him. To make his situation worse, another red-tailed hawk is aggressively moving in on his territory. He doesn't have the will to deal with the threat once and for all. So he resorts to picking dead carcasses off the road. While eating a raccoon that had been squashed by a car, Rachel spots him. Instead of answering her when she calls out to him, he pretends to be another, normal hawk, too embarrassed and ashamed to admit that he's eating road-kill.

Two days later, he stops by Rachel's house at Jake's insistence. She tells him that a lawyer and a long-lost cousin, Aria, have been searching for him. Chapman, too, is interested in his whereabouts. Tobias suspects a trap. Tobias meets his father's lawyer, DeGroot. The lawyer tells him the father he knew may not have been his real father, and his real father's will is meant to be read on his next birthday. Tobias is puzzled. He also tells him that Aria wants to meet him at the Hyatt hotel. Tobias leaves the law practice, and finds himself being followed by a Controller. He manages to ditch his pursuer, but rather than meeting with the Animorphs at the barn, he flies to the Hork-Bajir Valley.

There, Toby Hamee, Jara Hamee and Ket Halpak's seer daughter, tells Tobias that a child Hork-Bajir, Bek, is missing. It is then that a disbelieving Tobias discovers that the Hork-Bajir regularly leave the valley (led by Toby) to free more of their kind. Tobias quickly realizes that the Hork-Bajir are preparing themselves to fight humans when the war is over. They know that they won't be allowed to live in peace when the Yeerks leave if humans ever find out they exist.

Back at the barn, Tobias must deal with his friends' thinly-veiled pity for him, and the group splits up to both try to find Bek and investigate Aria. While Rachel and Tobias are watching her hotel, Aria leaves in a cab, and stops over at Frank's Safari Land and Putt-Putt Golf, a dodgy roadside zoo-slash-amusement park. It's there that they find Bek, locked in a miserable cage alongside a bunch of very depressed animals. They find Aria talking to the owner, Frank, who wants to make money off his "alien freak".

Tobias and the others storm the place and try to take Bek, tearing down the place in the process. But the Controllers were ready for them, and Tobias encounters Visser Three in a hideous kaftid morph. Visser Three thinks Tobias is Ket Halpak, because he is using her morph. The Visser assails Tobias with an acid attack, forcing him to run away from Bek in pain. The rescue fails, and the Animorphs and the Yeerks withdraw, with Bek in Yeerk custody now.

Tobias constantly wonders if he could ever live life as a human with Aria. He wonders if she's a Controller. He and Ax return to the Hyatt, and witness her saving a little girl. Tobias assumes this means she's not a Controller, but Ax is doubtful. Tobias swings by Rachel's house that night, and they engage in a hot debate about Tobias's humanity, with Rachel expressing sadness about the fact that she and Tobias can never be close due to his hawk body. The next day, the Animorphs and the Hork-Bajir plan their attack on the new Yeerk facility out of town.

The Animorphs and the free Hork-Bajir allow themselves to be captured. Tobias, in flea morph, jumps out of the cage, demorphs, morphs a Hork-Bajir, and opens the cage. A quick fight between the Hork-Bajir-Controllers and the freedom fighters results in the latter's victory. As they climb up to the Yeerk Dracon beam, Tobias spots Aria in a helicopter. Only then does he make the connection that Aria is actually Visser Three in a morph. Enraged, horrified, and hating himself, he falls to the ground, unable to will himself to join the fight. He is later rescued by Toby after a terrible fight ensues. The facility is destroyed, and Bek is saved.

Aware now that he is walking into a trap, Tobias must engage Aria on his own. He goes to the testament-reading, and discovers that his father was in fact Elfangor, the Andalite prince. Tobias gives nothing away, instead jeering that he was left no money and accusing Aria of merely seeking his inheritance. Only after he returns to his hiding spot does he break down, and decides that he can't give up his morphing powers because he must continue to fight for his people, just like his father did. Later that night, he flies to Rachel's where she lights him a candle on a birthday cake.

The next day, Tobias acquires the mother rabbit, and then kills and eats her. He then morphs her, and brings the baby rabbits under his protection from the rival hawk. 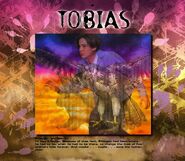 This book's cover morph in the Animorphs 2000 Calendar 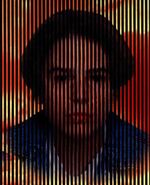 Vietnamese cover
Add a photo to this gallery
Retrieved from "https://animorphs.fandom.com/wiki/The_Pretender?oldid=24971"
Community content is available under CC-BY-SA unless otherwise noted.