The Predator, published in December 1996 and written by K.A. Applegate, is the fifth book in the Animorphs series. It is the first book narrated by Marco.

Marco never wanted to be an Animorph. He never wanted the ability to change into any animal he touches. He just wants to chill. Whatever happens, happens.

Jake, Rachel, Cassie, and Tobias know why Marco feels the way he does. He's worried about his dad -- the only family Marco has left. And if anything happens to him, his father will be all alone.

But something is about to change Marco's mind. It seems the Yeerks have a little surprise waiting for him. And it's definitely not nice. Now Marco has a reason to fight...

Marco is walking home one night from getting some groceries at a 7-Eleven when he hears an old man getting mugged by some punks in a dark alley. He decides to step in by using his gorilla morph to take care of the punks, but the old man gets scared and grabs a gun that one of the punks had and starts shooting, Marco high-tails it out of there. The next day, the Animorphs meet out in a meadow where they talk about stealing a Yeerk ship so that Ax can use it to get back home and inform the Andalites how desperate the situation on Earth is.

Jake, Marco, and Ax (in human morph) go to the mall to get the components needed to create a Yeerk distress beacon. After doing so, Ax tries food with a mouth for the first time and is overwhelmed by taste and goes crazy in the food court, snatching up half-eaten food and gobbling it up. The mall cops step in and try to stop Ax, but he makes a break for it and begins morphing back to Andalite form. That's when Jake and Marco find out one of the mall cops is a Controller. They head for a grocery store where they quickly acquire and morph into lobsters and hide out in the lobster tank until things calm down. They soon find themselves in a bag of ice and about to be boiled alive; they quickly demorph, freaking out the lady that purchased them, but they convince her it's all a dream. That night, Marco wakes up from a nightmare, and his dad checks on him because he said "Mom."

The next day, Ax finishes building the distress beacon, but unfortunately, it is useless without a Z-space transponder. The Animorphs figure that Chapman would have one, so they sneak into Chapman's basement room undetected (where Rachel had been previously in cat morph) by morphing black garden ants. Their experience in ant morph is nightmareish because ants are machine-like with no sense of self and because the tunnels they went through felt cramped and claustrophobic. When they finally get into Chapman's basement room and get the transponder, they also learn that Visser One is coming by to see how the Earth invasion is going. As the Animorphs head out, they're confronted and almost killed by an army of enemy ants but are able to demorph in time.

The Animorphs meet in Cassie's barn after Ax finishes the distress beacon to discuss where and when to lay their trap. While Jake and Marco are walking home together, Marco tells Jake he's had enough of fighting, and after he helps Ax use the distress beacon to call the Bug fighter, he's done being an Animorph. He says he doesn't want his father to leave flowers at two graves, for both him and his mom. Marco is surprised that Jake takes this admission well.

A few days later, on Saturday, the Animorphs fly out toward a quarry to set their trap. They assume their battle morphs, with Ax staying in his natural Andalite form. Ax then activates the distress beacon and minutes later, a Bug fighter lands. However, instead of just the one Hork-Bajir and one Taxxon they expect from the Bug Fighter, they discover they are surrounded on all sides by Visser Three and an army of Hork-Bajir, each armed with a Dracon beam. It turns out that the Yeerks had figured out the Animorphs had laid a trap and used it to trap them instead. The Animorphs are taken captive and brought onboard the Blade ship, where they travel to the Yeerk Pool ship in orbit high above Earth's surface. There, they meet Visser One, whose host body is a human female, but one that Marco, as well as Jake, recognizes: it's Marco's mother, who was thought to have died in a boating accident two years ago. They see that Visser One and Visser Three don't really get along before being escorted to a holding cell.

They try to figure out how to escape when Hork-Bajir who serve under Visser One appear and tell them they can get to an escape pod. They first think it's a trap, but realize that they are being given these instructions because Visser One wants Visser Three to be humiliated for letting the "Andalite bandits" escape. They battle their way to a bottomless elevator-like tube called a dropshaft, and take it into the escape pod room, where they get into an escape pod that is programmed to return them to Earth in the same area where they were initially seized.

The next day on Sunday, Marco and his father visit his mom's grave on the two year anniversary of her "death". Marco's father comments that he hasn't been a very good father to Marco lately (because of his despair over Marco's mother's death), and he doesn't think Marco's mother would want him to give up and continue working as a janitor. He has talked to his old boss, Jerry, about getting back to his work as an engineer. Marco is proud of his dad, and thinks back to his discovery that his mother is not dead. He now knows he has a reason to fight the Yeerks and remain an Animorph: to free his mother.

Later and earlier printing covers, respectively (these books did not come with the iron-on transfer decal)

Marco morphing into a gorilla

Back cover (no decal advertisement)

David Mattingly's original sketch of the inside cover.

Marco morphing gorilla flipbook found in the bottom right corner of the book.

Ad from inside book 4. The phrase "The Yeerks Are Among Us" is the same phrase that appears on the iron-on transfer that comes with this book.
Add a photo to this gallery

Marco morphing into a lobster

Illustration of Marco in mid-lobster morph 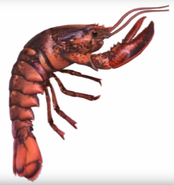 Lobster from the cover morph
Add a photo to this gallery

Marco morphed as gorilla fighting punks in an alley.

Marco, morphed as a lobster to hide after Ax causes a scene in the mall, is picked up out of his tank to be cooked.

Tobias looks on as the Animorphs morph ants to infiltrate Chapman's house to steal a Z-space transponder so Ax can go home.

The Animorphs, morphed in their battle morphs, use the Z-space transponder to call a Bug fighter to be Ax's ride home, and prepare to fight the one Hork-Bajir and one Taxxon they expect to find inside.

Visser One, whose host body is Marco's mother Eva, is seen by Marco and the others while they are held captive aboard the Yeerk Pool ship.

The Animorphs, still partially morphed in battle morphs, escape the Pool ship using an escape pod.
Add a photo to this gallery

Brazilian Cover for The Predator (2011 re-release)

2018 Vietnamese reprint cover
Add a photo to this gallery

Retrieved from "https://animorphs.fandom.com/wiki/The_Predator?oldid=24950"
Community content is available under CC-BY-SA unless otherwise noted.