View source
watch 01:36
We're Getting Mutants in the MCU - The Loop
Do you like this video?
Play Sound

Laura Battyanyi-Wiess (based on an outline by K.A. Applegate)

"The Yeerks have managed to repair the Helmacron ship and they've reactivated the sensors that locate morphing energy. [...] That would be the energy from the morphing cube. They're making another pass. If we don't get that cube out of here —"
"I'll get it. But what good will it do to move the cube, Erek? Won't the Yeerks just target it again?"
"Yes. That's why you and the others have to keep it moving until the Helmacron ship can be destroyed."
―Erek King and Cassie[src]

The Hidden, published in February 2000 and written by Laura Battyanyi-Wiess based on an outline by K.A. Applegate, is the thirty-ninth book in the Animorphs series. It is the eleventh book narrated by Cassie and the sixth book with Cassie as the sole narrator.

The Yeerks have discovered and repaired a damaged Helmacron ship. They know of its morph-seeking capabilities, and they plan to use the ship to capture the "Andalite bandits." And to find Elfangor's blue cube. The one that gave the kids the ability to morph.

Cassie, the other Animorphs, and Ax are in a pretty bad situation because they can't leave the cube in one place, they can't morph without being discovered, and they have to keep moving. It looks like this may be a battle the Visser can't lose...

The Yeerks repair a downed Helmacron ship and use its sensors to track the Escafil Device and the Animorphs morphing abilities. Cassie is forced to relocate the Escafil Device. During the process, a Cape buffalo and an ant inadvertently gain the morphing ability. The buffalo morphs Chapman and begins to learn speech, and the ant morphs Cassie. Cassie kills the ant when it demorphs, and near the end of the book the buffalo is killed by a Dracon beam.

Cassie from the cover morph 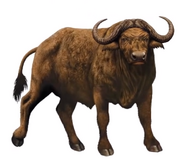 Buffalo from the cover morph

Ad from inside Book 38