Seerowpedia
Register
Don't have an account?
Sign In
Advertisement
in: Articles to be rewritten, Books, Time Travel, Jake Books

"We had two hours left. Then, if Ax was right, the Sario Rip would end, and the universe would have two Jakes and two Cassies, and would eliminate them both. Go to the Blade ship. Get aboard. Hope Visser Three could get us back. Somehow. Even without the Bug fighter's computer. Not much of a plan. But I was the leader, and a leader has to give people hope. Even when he doesn't have much himself."
―Jake[src]

The Forgotten, published in September 1997 and written by K.A. Applegate, is the eleventh book in the Animorphs series. It is the fourth book narrated by Jake, and the third book with Jake as the sole narrator.

There's been an accident. Someone crash-landed a Yeerk Bug fighter. And the Yeerks have been trying to cover it up - quickly. But not before Tobias spots it. So the Animorphs and Ax decide to steal the ship to show the world that Earth has been invaded.

That's when things go terribly wrong. Before they know it, Jake, the Animorphs, and Ax find themselves in another place. Another time. And there's no way home...

Jake is at school, square dancing with Rachel as his partner and despising it very much, though Rachel is enjoying his misery. Then Cassie shows up, much to Jake's embarrassment, and after laughing, Jake grabs her to do a little do-si-doing. She tells him to meet with Tobias after school because something big has happened. Suddenly, Jake finds himself falling through green trees, then snatching a branch, swing and flying through the air and catching another branch with his tail, and looking behind to see monkeys swinging towards him in the high treetops of the jungle. Then, he returns to normal, feeling a little weirded out by what just happened.

After school, he walks home with Marco and spots Tobias up in the sky, who tells them to hurry it up. They head for Marco's house, morph into their bird of prey morphs, and take flight, where Tobias tells them they're going to a Safeway, because there something going on there involving Controllers. Rachel and Cassie show up and Tobias explains how something busted a wall and caused quite a commotion, and the Yeerks are working fast trying to cover it up. Suddenly, Jake finds himself having another vision, this time he's in the darkness, face to face with some kind of big cat. Then, he returns to normal again, feeling like he's going nuts. They fly to the woods and demorph, while Tobias goes to find Ax, who shows up while the others are planning on what to do. They decide to morph into flies to get in because there will be rotting food in the store and it would be easier that way.

Jake goes home, where his dad Steve is preparing for to watch a Pay-Per-View boxing event with some work friends, as well as with Jake and Tom. During the fight, Jake sees that Tom is just as anxious to get to the grocery store as he is. Suddenly, Jake has another vision, this time he's in the jungle with the others and hears Marco talking. After the fight, Jake flies off to meet the others at a motel, but has a crash landing. They soon morph into houseflies with Tobias guiding them, but they have to deal with rain and passing through lanes of rushing cars, Jake is spun out of control by a raindrop, and a windshield is coming up to him. Suddenly, another vision comes: this time it's a kid throwing a spear, and Jake saw that it was coming for him. The vision ends and in a split-second, a downdraft saves him from the windshield, and they finally reach the grocery store where they find out what happened. A new experimental Bug fighter was the cause of the crash, so they decide they'll steal it and expose the Yeerks. Jake is still trying to grasp with the visions and being the leader, while Tobias provides a distraction so the others can sneak in the ship. They hear gunshots outside and Jake gets Tobias to fly in. They seal it shut and take off, unfortunately, they soon get spotted by radar, and two F-16s are heading their way, so they fly up higher into space. Then they see the Blade ship heading for them. The two ships fire their Dracon beams and they hit at the same time. Then an explosion of light occurs, which causes the two ships to spin out of control and start heading back down to Earth and crash.

Jake wakes up all alone in a jungle with a huge beetle and ants crawling on him, but he quickly brushes them off. Tobias finds him and leads him to the others and the wrecked Bug fighter. They figure that their current location is the rainforest of South America, and Ax explains that what happened was when the two Dracon beams were fired and were hit at the same time, it caused a Sario Rip, a rift in the fabric of space-time and sent the Animorphs and Visser Three either forwards or backwards through time. As they figure out what to do, Ax notices they're being watched, so Tobias goes to check it out, then spear is flown heading for Jake, just like in his visions, but he ducks, Tobias quickly flies back telling them there were some kids who are being chased by Hork-Bajir, and that some are coming their way. Jake can't decide what to do, so he tells Ax to make it so that the Yeerks couldn't fly the Bug Fighter, so he does that while the others run. Jake and Rachel go back to help Ax in their battle morphs, but Rachel couldn't keep up with Jake and they get separated. After he deals with a Hork-Bajir, Jake is bitten by a poisonous snake, but he demorphs and the venom goes away. Tobias tells Jake that Rachel is in trouble, and he races toward her, she finds her, still as a grizzly bear, out cold, and being torn apart by a swarm of ants. Jake tells Tobias to find more ants which he does, Cassie and Marco appear in their wolf morphs, Jake takes some bear fur to where Tobias found more ants, and he leads them back to Rachel and the two swarms battle. Just then, Rachel wakes up, demorphs, and heads towards a stream to wash off the ants, but as she does, Cassie tells her to get out because of a school of piranhas, Jake pulls her out just in time.

As they begin to go search for Ax, Ax appears as a spider monkey while carrying the computer core for the Bug fighter, making it useless, Ax leads the other to where he found the monkeys where Jake says the same thing Marco said from the vision, he explains about the visions and Ax says the visions are fluctuations where two simultaneous identical states of consciousness intersect outside of space-time, and theorizes that they've gone back about 24 hours into the past and are existing simultaneously in two separate locations, and if they don't undo the effects of the Sario Rip before the time it originally took place, or allow its effects to cease, it will result in the universe destroying them all as two of them can't exist in the same time. They acquire and morph the monkeys, where they climb a tree and and as they're swinging from vines, Jake sees some Hork-Bajir slashing their way through the undergrowth with a human-Controller and says to follow them. the human-Controller points at a pig, which a Hork-Bajir fires at and kills, but the Dracon Beam keeps going, slicing through a tree the Animorphs were hiding in, they escape but a Hork-Bajir aims at Jake but he races out of there. All the Hork-Bajir fire everywhere, destroying everything.

Just then, an anaconda drops from a tree and wraps itself around a Hork-Bajir and starts squeezing it, and the snake thought-speaks, revealed to be Visser Three in morph. Visser Three is very mad at what the human-Controller had done, saying they need the Bug fighter to recreate the Sario Rip and get home. Jake sees that he's made a terrible mistake risking Ax's life to get the computer core and now they were trapped. They travel very far and demorph, but then, they get surrounded by tribal hunters, one who was the leader comes up to Jake, pointing at him and imitating a monkey, which means he thinks Jake is a monkey spirit, because he saw them morph, he points at Ax calling him a devil, Jake assures he's not, then the hunter uses his spear to draw a picture in the dirt, revealing it to be a Hork-Bajir, and Jake assures it is a devil-monster. The leader calls himself Polo, and he and his people agree to help the Animorphs deal with the Yeerks. Just then, it starts to rain. Polo and his people disappear, and the Animorphs take shelter under a tree and go to sleep. Jake suddenly wakes up in pitch blackness, but sees two glowing eyes staring at him - a jaguar. Jake is scared, but he slowly raises his arm and acquires the jaguar's DNA and wakes up the others to tell them to do the same thing. They get a safe distance away and morph, Tobias tells them there's a light, meaning the Yeerks are working on the Blade ship. They travel through the darkness, admiring the beauty of the rainforest and reach the site, they see the Yeerks had drag the Bug fighter to the location, but too late they find out it was a trap, the Yeerks were expecting them to come with the computer.

Suddenly, the vines come to life and start attacking the Animorphs, it was Visser Three in morph, he morphed a creature from the Hork-Bajir homeworld called a Lerdethak. He quickly snatches and swallows Cassie, Rachel, Marco, Tobias, and Ax, but they're kept alive inside a pouch, and Jake is left all by himself. As Visser Three and some Hork-Bajir encircle Jake, Polo and his people come to help, they throw poison-tipped spears, but it doesn't work against the Visser. Jake then comes up with a plan, quickly he demorphs and morphs the spider monkey, swings through the Visser's vine-tentacles, and grabs one tentacle right below its head, he yells to Polo to throw him a spear, which he does, Jake grabs it and throws it right into the head, but then a tentacle whips towards Jake and wraps itself around his neck, squeezing. Suddenly, Jake finds himself back at the motel, right before the whole event happened, and he says they're calling it off. The next day, Jake talks with Ax about everything, and Ax explains that Jake was killed by Visser Three, but his consciousness merged with his still-living other self, and allowed him to undo the events that caused the Sario Rip. But because the events were never made to happen, only Jake remembers what happened, and the Animorphs can no longer morph the jaguar and spider monkey since they never acquired them. Jake then says the whole thing was a disaster, and that the only reason they're still alive is because he got lucky. Ax tells him something Elfangor once told him: "It's a leader's job to be lucky." Success is just luck, and he hopes that Jake's luck doesn't run out.

Advertisement for The Forgotten and The Andalite Chronicles, Nickelodeon Magazine, October 1997

David Mattingly's original sketch of the inside cover. 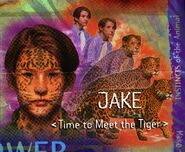 Flipbook from the pages of the book of Jake morphing jaguar.

Dutch back cover
Community content is available under CC-BY-SA unless otherwise noted.
Advertisement