Amy Garvey (based on an outline by K.A. Applegate)

The Experiment, published in March 1999 and written by Amy Garvey based on an outline by K.A. Applegate, is the twenty-eighth book in the Animorphs series. It is the fifth book narrated by Ax and the third book with Ax as the sole narrator.

Now the Animorphs and Ax are not only faced with trying to slow down the Yeerks' invasion, but they also have to try and put an end to the genetic testing on a small group of humans. This time there's only one chance to stop the Yeerks. And if anything goes wrong, it's all over...

The Animorphs find out from Erek that the Yeerks have taken control of a meatpacking plant and a laboratory. They acquire chimpanzees and infiltrate the lab. They don't find very much information so Tobias and Ax morph into bulls (thinking they would morph into steer but not realizing that the DNA does not include surgical procedures) to go to the meatpacking plant. Inside the plant, they discover a room with humans in cages. The computer tells them that it is an experiment designed to destroy the free will of the human population so that the Yeerks can take over easily, but a Yeerk scientist eventually confirms that the experiment was a total failure.

"I took some grief for this from the fans. A fair number were upset that I ended with all of the Animorphs ordering hamburgers. I am in favor of being as humane as possible in dealing with livestock, but I'm not a vegetarian. I kind of think that I'll start worrying about the treatment of cows more once there are no more political prisoners, no more children dying of curable diseases, and no more fanatics blowing themselves up to murder civilians."

Ax morphing into a cow

the two bookmarks that can be found inside book 28.

Bookmark (front and back) when punched out 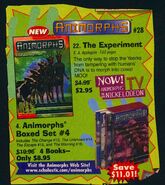 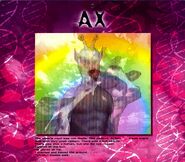 Ad from inside Book 27