The Discovery, published in July 1998 and written by K.A. Applegate, is the twentieth book in the Animorphs series and the first book in The David Trilogy. It is the sixth book narrated by Marco and the fourth book with Marco as the sole narrator.

The blue box Elfangor used to create the Animorphs has been found by a kid named David. David has no idea what he has -- or what it can do. But Marco does. And when he sees David with it, he knows the Animorphs have to get that box. At any cost.

But what should have been a simple plan ends up going horribly wrong. And David is on the run with the Animorphs and Ax. Now they have only two choices: turn David over to the Yeerks. Or make him the sixth Animorph.

After failing miserably to pick up a girl at his locker, Marco is stymied to find a boy carrying the morphing cube, also known as the Escafil Device. Marco introduces himself to the new boy, David, and lamely tries to buy the box off him, but David ignores him. Marco tells Jake about it, and both agree that the situation needs to be taken care of immediately. But that's not the only surprise in store for them. Erek King tells them that the presidents and prime ministers of Britain, France, Russia, Japan, Germany, and the U.S. are gathering at the Marriott Resort on the city coast to discuss the problems in the Middle East. Erek also tells them that the Yeerks are plotting to infest each leader, and soon the most powerful nations in the world would be under Yeerk influence. The biggest problem is that one of these heads of state is already a Controller. Now the Animorphs need two plans: one to retrieve the blue box, and another to stop the Yeerks from infesting the powerful leaders.

Marco, Tobias and Rachel try to raid David's house in bird-of-prey morphs. Unfortunately, it fails miserably. Tobias is rendered temporarily dazed, Marco is attacked by David's cat, and David shoots Rachel with his BB gun. The next day at school, David tells Marco his seemingly ridiculous story about trained birds, and discusses his plan to sell the blue box online. Jake tells Marco to skip the rest of the school day in order to stop the automatic e-mail David has set up from going out.

During school, Marco takes Ax with him to stop David's e-mail from being sent. Unfortunately, they're too late, due to David's computer's clock being an hour fast. Marco acquires Spawn, David's contraband, defanged cobra. Visser Three storms into David's house with a team of Hork-Bajir. A fight ensues between the Yeerks and the Animorphs, destroying David's house. Rachel, in bear morph, rams David out the window, and the Animorphs retreat. The Yeerks withdraw with David's mother and father.

The Animorphs are unsure of what to do with David; although Ax draws attention to the fact that they can use the box to give him the power to morph, the Animorphs vote on whether or not to do it. Marco and Ax decide that they cannot risk recruiting David, given his strange behavior and their lack of knowledge of him. Tobias votes to take him in out of moral concern, while Rachel and Cassie decide that David might be their ticket to recruiting more Animorphs. With Marco and Ax outvoted, they reveal to David the Yeerk invasion and give him the morphing power.

From the very beginning of his recruitment, David displays his eagerness to kill, and disobeys Jake's orders. On the way to the Marriott resort, David indiscriminately kills a crow, although he passes it off as his morph's instincts taking control. As they near the resort, they spot the Blade ship taking a Marine One helicopter hostage. Not sure whether it is the real Marine One or the decoy, the Animorphs, fearing that the Yeerks might have just captured the President of the United States, enter the Visser's ship through the open hatch. The Animorphs morph roaches and discover that Visser Three is not infesting whomever he kidnapped, but rather acquiring his DNA. As the Animorphs run to hide under the helicopter, the hatch opens once again, and all five cockroaches tumble through the air, falling down to the beach below.

Back cover. The text "Part One of a Trilogy" is placed below the summary text. 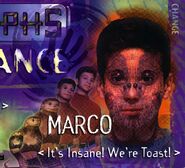 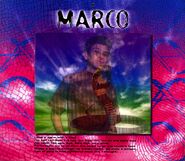 Finnish cover
Add a photo to this gallery

Italian back cover
Add a photo to this gallery
Retrieved from "https://animorphs.fandom.com/wiki/The_Discovery?oldid=24959"
Community content is available under CC-BY-SA unless otherwise noted.