Edit
watch 01:36
We're Getting Mutants in the MCU - The Loop
Do you like this video?
Play Sound

Laura Battyanyi-Wiess (based on an outline by K.A. Applegate)

"This was my family. My brother, the killer. My father, the target. And me, the fool in the middle. Just the three of us. If my brother Tom, in a desperate, last-ditch attempt to save himself, tried to kill my father, then I would morph. And the last thing my brother would see was me, his brother, his unknown enemy, rear up and destroy him with all the ruthless, savage power that was mine to command. I had told myself that I would do whatever had to be done, and I would."
―Jake[src]

The Conspiracy, published in June 1999 and written by Laura Battyanyi-Wiess based on an outline by K.A. Applegate, is the thirty-first book in the Animorphs series. It is the eleventh book narrated by Jake and the seventh book with Jake as the sole narrator.

Jake's grandfather has died. It blows the family away -- especially Jake's mom. So Jake's parents decide they should all travel to the grandfather's home to help with the arrangements. In another state. For three or four days.

This is a very big problem for Jake's brother, Tom. He can't be away from the Yeerk pool for that long. So Tom refuses to go -- and his father insists. But Tom's Yeerk will do anything to survive. Including making his father less of a problem.

Now Jake, the other Animorphs, and Ax have to find a way to protect his father without Tom discovering their secret. And without having to choose between his father's life... and Tom's.

2 front covers showing the 'Watch Animorphs on TV' logo for the American and Canadian editions.

Promotional Postcard given out around the time Book 31 was released. This same puzzle can be found in the back pages of The Conspiracy.

Back of Promotional postcard

Jake from the cover morph 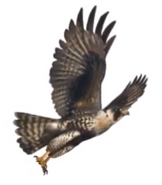 Peregrine falcon from the cover morph

Ad from inside Book 30

Word Puzzle from the back of Book 31. This is the same as the puzzle on the promotional postcard that was given out around the time this book was released.

K.A. Applegate answers FAQs - from the back of book 31