"I was looking at myself. Back when I was human. And looking at myself, I couldn't escape the truth – that wasn't me anymore. I wasn't Tobias the human. I had become something else. Something new. What had the Ellimist said? "... you are a beginning. You are a point on which an entire time line may turn.""
―Tobias[src]

The Change, published in November 1997 and written by K.A. Applegate, is the thirteenth book in the Animorphs series. It is the third book narrated by Tobias, and the second book with Tobias as the sole narrator.

Tobias has pretty much gotten used to his life. He's a red-tailed hawk with the mind of a kid. It was weird when he first got trapped in morph. But now it's almost okay. After all, how many kids actually get the chance to fly?

Now Tobias is about to make a very special choice. A choice that the other Animorphs and Ax know nothing about. And it could mean the difference between being a hawk...and being human...

Tobias is flying over school and sees Rachel outside and decides to take her on a tour to show her another entrance to the Yeerk pool that he had discovered. Soon, though, he finds he is not where he was heading; they suddenly are flying over the forest, without warning. He turns and turns but cannot get to the spot he wants to go to. They try to fly away but discover that they are still in the same spot. Then they notice one of the trees sliding to reveal a secret hole and out from that hole pops two Hork-Bajir. They are then promptly pursued by human-Controllers on dirt bikes, ATVs, and pick-up trucks, bristling with shotguns, pistols and automatic rifles. Tobias and Rachel decide to help the two Hork-Bajir, as they are enemies of the Yeerks who chase them. They lead one to safety, but the other trips over and falls into a ditch. The first Hork-Bajir screams to the other in the Hork-Bajir language, but they do not understand, he then explains to them that the other Hork-Bajir is his wife. They tell him to run or he'll risk dying or losing his freedom, and the Hork-Bajir runs for his life. Tobias then leads him to a cave for the time being.

After telling the other Animorphs what happened, they suspect that it could be a Yeerk trap to lure them out. They return to the cave the Hork-Bajir is hiding in, with Ax and Tobias picked to deal with the Hork-Bajir, while the others would stay close by in morph. After almost beheading Ax, the Hork-Bajir comes out, revealing his name to be Jara Hamee. Ax isn't convinced he's not a Controller, so to prove it, Jara slices open his head and opens up the gash. Horrified, but seeing no Yeerk in his brain, the Animorphs have some peace of mind. Just then, the Yeerks begin to close in on their location, and Tobias concocts a plan. In order to help Jara escape, Rachel morphs into him to lead the Yeerks on a wild goose chase. Tobias is worried about her, and so he hitches a ride on one of her forehead blades. However, Tobias is transported to the other side of the woods mysteriously, to the territory of a Swainson's Hawk, where the Hork-Bajir from before is cornered by a group of Controllers, one of which is revealed to be Visser Three, who demorphs and calls the Hork-Bajir Ket Halpak. Tobias provides a distraction by drawing out the aggressive Swainson's hawk, and he rakes the Visser's stalk eyes, allowing Ket to escape.

With Jara Hamee and Ket Halpak reunited, the Animorphs now decide where to hide them. Tobias suggests a hidden valley that he knows of, that has fresh streams, a meadow, and tall trees. However, Tobias wonders how he knew of the valley's existence or how he has memories of how it looks like if he had never been there before. Tobias now suspects foul play - and that someone or something is manipulating him. During the night while he is guarding the Hork-Bajir along with Ax, Tobias suddenly has visions of tracker Taxxons hunting. To avoid the Taxxons picking up the Hork-Bajir scent, Tobias and Ax take the Hork-Bajir and retreat further toward the mountains. While riding on the Hork-Bajir, Jara tells Tobias that a voice in his head told him to escape from the Yeerk Pool and that "it" would send a guide to ensure their freedom. Frustrated about being used, Tobias stops everyone and demands to find out what is happening. Tobias then finds himself in another plane, and sees himself as a cross between human and hawk. He encounters the Ellimist, who explains that while his species does not interfere with other peoples' lives, he wishes to save the Hork-Bajir. He also learns that when he could not get anywhere earlier and the images in his head were all the Ellimist's doing. Frustrated, Tobias asks for his innermost wish to be granted, which the Ellimist agrees to.

Tobias and the Animorphs take the Hork-Bajir to the mountains, pursued by Yeerks in helicopters, Hork-Bajir and Taxxons. Tobias, out hunting breakfast, is caught in the helicopter's rotor vacuum, and breaks his wing. He is immediately discovered by a raccoon, who prepares to eat him. At that moment, the Ellimist restores Tobias's ability to morph, but does not return him to human form. Tobias is enraged, accusing the omniscient being of not keeping his promise. Tobias escapes by acquiring and morphing the raccoon, and rejoins the others.

The Animorphs realize that the Yeerks will not give up until the free Hork-Bajir are dead or captured, because if the two of them escape safely, others would try to do the same; additionally, as the Animorphs have revealed their true forms to the Hork-Bajir, Ax states that they could never be recaptured. Jara and Ket state that they would rather be dead than enslaved, which Rachel agrees with, warming her up to them. Tobias comes up with a plan: he acquires and morphs Ket and, together with Rachel in Jara morph, traverse towards the ravine. The two Animorphs jump over the ravine and are caught by Marco, in gorilla morph, in a small cave right below the top of the ravine that is not visible from the top. At the bottom, the real Ket Halpak and Jara Hamee are pretending to be dead, while Cassie and Jake, in wolf morph, begin to rip their flesh (with Tobias stating that despite it being painful, the Hork-Bajir would be able to heal from the injuries). Visser Three, witnessing the supposed feasting, is convinced that they are dead and the Yeerks give up searching. The Animorphs then take the Hork-Bajir to the valley, which Jake suspects the Ellimist created and Tobias discovers is very difficult for others to find.

Later that night, Tobias finds himself irritated at the Ellimist's failure to deliver on his promise. As a response, the Ellimist sends Tobias back in time, to the night before he went to the Abandoned Construction Site with Jake and the others. Upon seeing his younger, human self, Tobias comes to terms with the fact that he is no longer the human self he used to be; he also feels that this situation is familiar, realizing that he, as a human in the past, met his future hawk self but forgot about it. Tobias remembers the Ellimist's statement about Tobias being able to change a timeline, and is given a choice: he could tell his younger self, who has waken up, not to go to the construction site, thereby preventing him from gaining the power to morph or being trapped as a bird, or he could decide to let things pass as they did and use the opportunity to acquire his human self. Tobias chooses the latter, accepting that he wishes to be a hawk with the ability to morph and become human temporarily rather than be human forever. Returning Tobias to the present time, the Ellimist asks Tobias if he has delivered on his promise, and Tobias replies that he has. The Ellimist then warns Tobias that he has two hours in a morph, and that if he traps himself as a human, he would never be able to fly again. The next day, he shows up in human morph at school for Rachel's Packard Foundation Outstanding Student award ceremony, to Rachel's amazement. 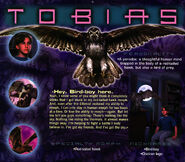 The inside cover of 13 appears in March on the Animorphs 1999 Calendar. 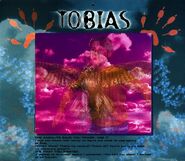 Here's a gif of the flip book inside 13. 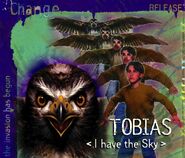 Spanish cover published by Ediciones B.

Spanish cover of a combined edition of books 13-15, published by Ediciones B in Spain.