"This is my hirac delest — my final statement. I have formed the mental link to the thought-speak transponder in my fighter's computer. I will record my memories before the Yeerks annihilate all trace of me. If this message someday reaches the Andalite world, I want the truth to be known. I am called a great warrior. A hero. But there is a great deal that no Andalite knows about me. I have not lied, but I have kept the truth a secret. This is not my first visit to Earth. I spent many years on Earth... and yet, no time at all."
―Elfangor-Sirinial-Shamtul[src]

The Andalite Chronicles, published in November 1997, is the first Chronicles companion book to the Animorphs series, written by K.A. Applegate. Narrated by Elfangor-Sirinial-Shamtul, the book tells the story of how the young Andalite aristh rose to the rank of prince, with the events of the tale taking place after the main story of The Hork-Bajir Chronicles and leading up to his final moments in The Invasion.

His name is Elfangor-Sirinial-Shamtul.

An Andalite war-prince. The one who gave five young humans the ability to morph into any animal they touch. They are still out there, fighting an evil so powerful there isn't a moment that goes by when they can actually feel safe. Their story continues.

But this is how it all began...

The book takes place before and leading up to the events in The Invasion. It is narrated by Elfangor-Sirinial-Shamtul. It begins with him uploading his hirac delest into his fighter's computer before facing Visser Three at the abandoned construction site. The rest of the book is then a flashback of Elfangor's personal history, beginning with his life as an aristh, a warrior in training and ending with him at the construction site. Elfangor and his fellow aristh Arbron rescue two humans from the Skrit Na: a young girl named Loren and a young boy named Hedrick Chapman. Elfangor and Arbron are assigned to return them to Earth under the leadership of a disgraced War-Prince named Alloran-Semitur-Corrass. However, upon realizing the Skrit Na were in possession of the mythical Time Matrix, they were forced to go after it. Arbron became trapped as a Taxxon nothlit, and Elfangor becomes inadvertently responsible for Alloran's infestation. Eventually, Elfangor, Alloran and the Yeerk controlling him, as well as the humans fall into a black hole. They were forced to use the Time Matrix to escape, which takes them to a fragmented universe created from the memories of Elfangor, Loren, and the Yeerk (now Visser Thirty-Two). Elfangor and Loren were able to escape to Earth, where he morphs a human and stays in that form. He assumes the name Alan Fangor and marries Loren some time later, but as she becomes pregnant with their child, revealed to be Tobias, the Ellimist repairs Elfangor's timeline and returns him to his people. Elfangor went on to become a great Andalite hero, leading to the events of the first Animorphs book, where Visser Thirty-Two, having escaped the collapsing universe, has been promoted to Visser Three.

Andalite Chronicles Inner Cover folded out (from the combined edition of the book, which included one cover on the front, and the other two covers as inside covers.

The Andalite Chronicles was released in three books for the Scholastic School Market Edition- Elfangor's Journey, Alloran's Choice, and An Alien Dies, so three covers were created.

Flipbook animation on the bottom right corner of the pages of the regular edition.

Advertisement for The Forgotten and The Andalite Chronicles, Nickelodeon Magazine, October 1997 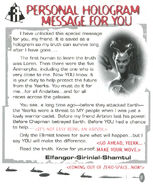 Ad from inside Book 11

Ad from inside Book 12

Ad from inside Book 12

Ad from inside Book 13