Nickelodeon Magazine was a kid's magazine published in the US from 1990 - 2009, as well as internationally. It featured many articles on current pop culture, particularly nickelodeon shows. Issues from the 1996-2001 time period when the Animorphs book series was published would intermittently have articles or advertisements about the books, TV show, or games.

Ad insert inside back cover, August 1996

Ad for Book 11 The Forgotten and The Andalite Chronicles, October 1997

Ad for the David Trilogy and The Hork-Bajir Chronicles, September 1998 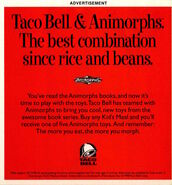 Ad for Taco Bell fast food toys, November 1998. This is almost the same as an ad in the November 1998 issue of Disney Adventures Magazine.

Ad for the first of the Animorphs VHS Releases, March 1999

Ad for three of the Chronicles books, published at the time VISSER was released, and The Hork-Bajir Chronicles was released in paperback, October 1999

Ad for the PC game Know the Secret and the Playstation game Shattered Reality, October 2000

Ad for the last two books in the series, The Answer and The Beginning, May 2001
Add a photo to this gallery

Shawn Ashmore interviewed about X-Men and Animorphs, August 2003.
Add a photo to this gallery
Retrieved from "https://animorphs.fandom.com/wiki/Nickelodeon_Magazine?oldid=19799"
Community content is available under CC-BY-SA unless otherwise noted.