"My friends — Jake, Rachel, Cassie, and Tobias — and I had the distinct misfortune to stumble upon a dying Andalite warrior prince who told us about the Yeerks and their invasion of our planet. He gave us the gift and curse of morphing, an Andalite technology that allows us to acquire the DNA of any animal and become — morph — that animal. This is our most spectacular weapon."
―Marco[src]

Morphing is the main weapon of the Animorphs. The morphing ability was invented by the Andalites in the mid-1960s.[1]

"As an Andalite, I have the power to morph. It's not something we're born with – it's a technology. But we invented it, and we are the only race in the galaxy that has it. Except for my human friends, that is. They can morph, too. But it's thanks to Andalite science. And thanks to the fact that my brother broke our own laws to give them this power."
―Ax[src]

Morphing is an advanced bio-technological process created by the Andalites, its power made transferable via a small, blue cube called the Escafil device. Morph-capable beings are capable of 'acquiring' the DNA of any animal, allowing them to physically 'morph' into that animal at will. [2] The DNA is stored inside the body within a molecule or cell, supercooled to sub-zero temperatures, lying dormant until called upon for a morph. This stored DNA simply floats around in the blood system until called forth by the morphing technology.[3] The morpher's original DNA is stored in a similar fashion while in morph.[4]

Morphing technology is still relatively recent, and very unpredictable. Any damage or injury sustained by the acquired animal or while in morph will be healed, as the body is based purely on the DNA. Some, like the Animorphs, have found success in integrating very small amounts of skintight clothing into morphs. Usually this would consist of things such as leotards or similarly tight clothes, although they are unable to morph items such as coats or shoes.

If one stays in morph longer than two hours, they become trapped in that morph, turning into a nothlit. A nothlit cannot return to their original form, with very few exceptional circumstances, such as natural metamorphosis, time travel or through the intervention of powerful beings such as the Ellimist. While in morph, the morpher is capable of using thought-speak, a telepathic form of communication. One also has the drawback/advantage of being confronted with the morphed creature's mind and instincts. This can be both beneficial and detrimental depending on the situation. There is no known limit as to how many morphs one can possess.

"Morphing technology allows a person to absorb the DNA of any creature he touches. It takes concentration and focus, because the biotechnology of morphing is triggered by thought commands."
―Elfangor[src]

Morphing uses cascading cellular regeneration, combined with a variant of Z-space technology and thought commands, in order to make the transformation.[5] After acquiring an animal, the morpher must focus on the mental picture of the animal they wish to become. The thought commands subsequently trigger the acquired DNA, held within the cells at sub-zero temperatures, to resurface and assert itself. It typically takes a few minutes to morph, although one can shorten the time with experience; with enough experience or under moments of duress, one can complete a morph at an accelerated rate. Estreens, who possess talent and mastery over morphing, are capable of morphing nearly instantaneously or within seconds.

"When you morph something smaller than yourself, your body mass must go somewhere. So it goes into Zero-space. Zero-space is the space that ships travel through when they are going faster than light. It's not very likely to happen, but sometimes a ship traveling in Z-space will intersect with a temporarily parked mass."
―Ax[src]

While morphing, the morpher's consciousness is sent into Z-space, where it retains a mental link with the mind of the morphed animal. Should a Yeerk be present within the morpher's mind, the Yeerk's body will morph with the host's mind, and the Yeerk's consciousness will be sent to Z-space as well, where it will retain a mental link on both the host and the mind of the morphed animal. Additionally, when one morphs into a creature smaller than their original self, the leftover mass is transported to Z-space, where it remains until the morpher demorphs and resumes their original shape; inversely, when morphing into an animal that would require additional mass, Zero-space matter is converted into the mass needed for the larger morph.

The leftover mass in Z-space may run a marginally low risk of coming across any faster-than-light spaceship traveling through Zero-space. If the leftover mass is hit by the ship, it would be incinerated, although if the mass is merely swept alongside the ship's wake, it may result in the morpher's original bodies being sent to Z-space. Should the morpher survive in Zero-space, they may undergo a 'snapback effect' in which they would be sent back to whence they came after a certain amount of time, with their original morphed mass remaining in Zero-space until they demorph. It is unknown what happens to the original mass of a morpher who has trapped themselves in a much smaller morph.

"To acquire is to absorb the DNA of a species. It is the first step in morphing that creature."
―Elfangor[src]

In order to acquire a creature, one must make physical contact with the subject in question. The acquiring process demands concentration and a break in concentration may abort the process. During the process, when the animal is being 'acquired', it may fall into a trance and becomes docile for a few seconds. Using a Frolis Maneuver, a morpher can also acquire several samples within a short amount of time and combine them into one DNA strand to create a new being for a morph. This could be used, for example, to avoid having an exact duplicate of a human when in morph, should one be morphing a human.[6]

"Morphing is a powerful weapon, but it has rules. 1) You can't change directly from one morph to another without first returning to your natural body. 2) You have to acquire DNA directly from an animal. You can't acquire it from another morph. 3) You can't stay in morph for more than two hours at a time, because if you do, you stay permanently. You become what the Andalites call a nothlit."
―Tobias[src] 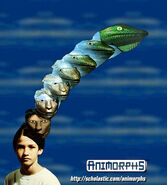 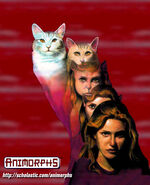 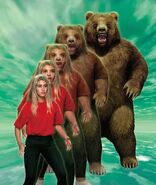 Ax morphing into his human morph 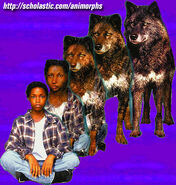 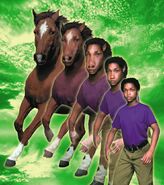 The Animorphs morphing into dinosaurs 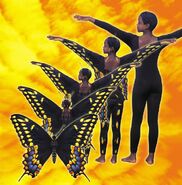 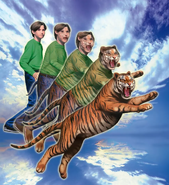 Jake morphing into his older self

Jake morphing an anaconda
Add a photo to this gallery

Retrieved from "https://animorphs.fandom.com/wiki/Morphing?oldid=24952"
Community content is available under CC-BY-SA unless otherwise noted.