"Cassie. Fifty, sixty Hork-Bajir might all have to live in that structure. [...] If a group of Hork-Bajir spend any prolonged time in those conditions, they could easily die."
"That's right, Mom. The Hork-Bajir could die. Every single one of us, human and Hork-Bajir and Andalite, could die. Any day. At any time. I still don't get your point."
"Cassie! How can you say that? We're talking about lives."
―Michelle and Cassie[src]

Michelle is Cassie's mother and the head veterinarian at The Gardens.

Michelle is head veterinarian at The Gardens zoo. She also works with her husband at the Wildlife Rehabilitation Clinic.[1]

"Suddenly, unexpectedly, I was angry. Mad that my mother, a scientist, wouldn't — or couldn't — face the awful truth. That we were at war. That the rules had changed. That we had to do things we'd never choose to do under peacetime circumstances. That we didn't have that luxury. That every single minute of every single day we had to make sacrifices we'd rather not make. And I was angry that my mother was forcing me to confront her with this truth."
―Cassie[src]

Cassie's mom is called "Aisha" on her animorphs ID card, produced earlier in the series 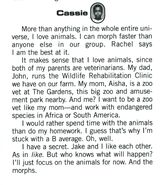 Retrieved from "https://animorphs.fandom.com/wiki/Michelle?oldid=23833"
Community content is available under CC-BY-SA unless otherwise noted.