The Animorphs franchise didn't stop at its successful book series and TV show - three video games were created as well, all released in the year 2000. Animorphs:Shattered Reality was made for Playstation, Animorphs:Know the Secret was made for PC, and Animorphs was made for GameBoy Color. GT Interactive acquired the license to make a PC and Playstation game in 1999. [1]

Synopsis: In this game, you get to play as Jake and his Tiger morph, Marco and his Rhino morph, Rachel and her Grizzly morph, Cassie and her Wolf morph, but Ax and Tobias are not playable. Visser Three has gotten a hold of a Continuem Crystal, and tries to use it to control all reality with a machine, but it blew up when he tried to use it, shattering reality itself. You essentially track down Animorph coins, defeat alien enemies with your morphs, and hunt down shards of the Continuem Crystal. There are nine levels, the last one being a final battle with Visser Three.

Synopsis: The game is centered around gameplay that is really like a dumbed down version of Pokemon games. Example, people look like they do in Pokemon games and you get morphs by defeating the animals/aliens you fight in Pokemon style combat.

Based on Scholastic's book and TV series, Animorphs is a turn-based tactical combat game featuring 12 animal morphs, which you must gather to defeat your enemies, the Yeerks.

This interactive, arcade-style game was available for free download on the Scholastic Animorphs web site. The object of the game was to help Jake through the maze to the Yeerk Pool. Find colored keys and use them to free gorillas from their matching-colored cages. Once you free the gorilla, you can use its morph to help Jake chase off Controllers. After you have collected all the keys and freed all the animals, you are allowed entry to the Yeerk Pool area, where you must help him find the Kandrona ray machine that feeds the Yeerks and destroy it.

Help Tobias Rescue the other Animorphs! 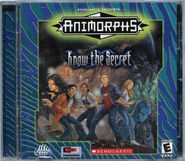 Know the Secret inside 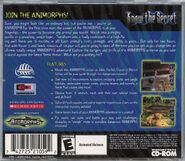 Know the Secret CD case back 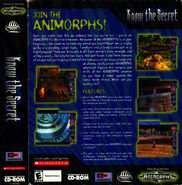 Know the Secret game box back