The UK publisher Scholastic Hippo published Animorphs books #1-54, Megamorphs #1 and 2, The Hork-Bajir Chronicles, and The Andalite Chronicles. Books #47-54 were published as combined editions of 2 US books for each UK book: 47/48, 49/50,51/52, 53/54. Earlier printings of books had a more plain background (used for books #1-18) and later printings (including the later books #19-54 and reprints of #1-18) had more colorful striped backgrounds. The earlier printings of books #9,10,11,12,13 and Megamorphs #1 included collectible Character Cards, one character for each book. If you collected all six cards, they would spell a message when put together, and you could use that message to enter a contest to win a mountain bike and other prizes.

Book 18
Add a photo to this gallery

Book 18
Add a photo to this gallery

The Hork-Bajir Chronicles back cover

Megamorphs #2 back cover
Add a photo to this gallery 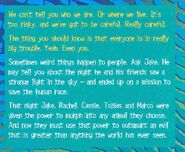 Retrieved from "https://animorphs.fandom.com/wiki/International_Publications/UK?oldid=25068"
Community content is available under CC-BY-SA unless otherwise noted.