In the Time of Dinosaurs

In the Time of Dinosaurs

Megamorphs #2: In the Time of Dinosaurs, published in May 1998 and written by K.A. Applegate, is the second book in the Megamorphs series, a set of companion books to the Animorphs series. With respect to continuity, it takes place between The Decision and The Departure. It is narrated by all six members of the Animorphs.

Everything was going fine. Until the explosion. An explosion that blows us millions of years back in time. Back to the age of dinosaurs. Now Tobias, Cassie, Marco, Ax, Jake and I are fighting for our lives with every step we take. But that's not our biggest problem. Our biggest problem is we have no idea how to get back to our own time ...

Front cover for edition which has the Rachel inside cover

The official Animorphs web site invites readers to download art for all six covers and all six inside covers. (for whatever reason, this doesn't include the seventh inside cover with all six animorph pictures) 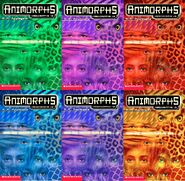 MM2 Promotional Postcard given out with the book

MM2 Promotional Valentines given out around the time MM2 was released

Ad for MM2 in Nickelodeon Magazine, May 1998

Megamorphs 2 in-store display using the same Tyrannosaurus illustration that is on the poster and the postcard, and areas for each of the seven different covers. (If you have a better quality pic of this, upload it!)

This book's Scholastic Edition was split into two half-size books: Part I and Part II.

Scholastic Edition books Part I and Part II back covers