"The Howlers. The killing. It's a game to them. They're having fun. They're enjoying it. Like when dolphin leap into the air just for the fun of it and play follow the leader, it's a game."
"They're destroying entire races for fun?"
"Yes. They don't know what they're doing. Cassie... they aren't adults. The Howlers are all children. [...] They're what Crayak made them. They have a life span of three years. They have no mature phase. They don't reproduce; they're grown in a factory. There are no adult Howlers."
―Jake and Cassie[src]

Howlers (also known as Crayak's Children) were the alien shock troops of the nearly-omnipotent Crayak. However, Crayak was forced to render the species extinct when Jake took advantage of their collective memory, rendering them harmless.

"Then the Howlers came. They suddenly popped out of Zero space, thousands of powerful ships. They had come from clear outside this galaxy. The Pemalites had no idea who they were. And they never found out what the Howlers wanted. The Howlers made no demands. They just attacked. Maybe that's all they wanted: to destroy."
―Erek King[src]

The Howlers were first mentioned in The Android, when the Chee Erek King explains that it was the Howlers who destroyed the Chee's creators, the ancient, dog-like race, the Pemalites. They made their appearance in The Attack, when Crayak and the Ellimist have a contest between seven of the species and the Animorphs, along with Erek. In the fight, Jake manages to upload all of his memories into a Howler – causing the Howler to realize that humans and other species are, in fact, sentient beings with feelings and emotions. Crayak quickly destroyed the infected Howlers, to keep this information from reaching the collective memory. However, a single memory ended up getting through – a memory of Cassie kissing Jake, who was in a Howler morph. The Ellimist informs the Animorphs that this, in effect, destroys the Howlers as a threat, as a memory of love makes them useless to Crayak. For Jake's role in this, Crayak formed even greater hatred for him, and has worked harder to destroy him than the other Animorphs. At some point in history, the now friendly Howlers greet the Sharf Den by kissing them.

Howlers were known to have wiped out several species, including the Nostnavay, Graffen's Children and most notably, the Pemalites. They could, in effect, be seen as the opposite of the Pemalites, who were created by the Ellimist to spread life – though both species, interestingly, are noted for wanting nothing more than to have fun.

Howlers had cracked, black skin that resembled hardened lava; beneath the black, in the cracks and creases of the flesh, were bright, red lines. Humanoid in appearance, their bodies were split in two at the waist, and the two halves tethered together by elastic skin; this bearing allowed them to turn their upper body all the way around and keep themselves in the fight permanently, even when thrown away. They had two arms with humanoid hands, with retractable claws attached to the wrists and huge heads with large, expressionless, robin's-egg blue eyes, which had the ability to make out major organs within their prey.

Their most fearsome weapon were the howl that gave them their name. The howl was modulated to affect the complex, intelligent brains of sentient beings, and almost instantly disoriented and crippled those who heard it. Howlers were very fast, extremely resilient, and highly talented at combat. In The Attack, a single Howler was capable of holding back and crippling all six of the Animorphs in their primary battle morphs. Their super-fast regenerative abilities allowed them to quickly overcome even the worst physical damage. The Howlers operated as a collective unit; the experiences of any one Howler were shared among all of them, so that every single one may become the best possible combatant.

"I had begun to acquire him. And he felt the torpor, the lethargy that creatures usually feel when acquired. He stared, eyes full of hate, unable to raise his deadly howl. While I kept my grip on him, while I drained his DNA into me, I used my free hand to strip away his weapons. One by one. They made a small arsenal falling around us."
―Jake[src]

Jake acquired a Howler in The Attack. After tricking a Howler into leaping off of a cliff, Jake, in peregrine falcon morph, dove after him, sinking his talons in the Howler, demorphing in mid-air and then acquiring the Howler. Jake then remorphed into the falcon as the Howler continued to fall, dying upon impacting the ground.

Jake used the Howler morph to knock out one of the enemy Howlers, and then, using a memory-device, implanted all of his human memories into the Howlers, tainting their collective memories and forcing the Crayak to murder them.

The Animorphs taking on a Howler. 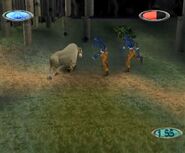