"Flies can fly straight up. Straight down. They can turn in less than the blink of an eye. And I'm talking a full, one-hundred-eighty-degree turn in midair, no problem. They can fly on their sides and upside down. They can do loops and figure eights. They can fly figure eights inside a small juice glass. And unlike birds, flies can land on anything. Anything. Horizontal, vertical, rough, smooth, wet, dry, still or moving, living or not. They are very amazing insects. Very gross, very amazing insects."
―Jake[src]

The housefly (commonly referred to as fly) is an aerial bug morph used by the Animorphs.

"Tobias had never morphed a fly before. He'd just acquired the DNA earlier that morning."
―Jake[src]

The housefly was first acquired in The Capture, by Jake, Rachel, Cassie, Marco and Ax. After discovering that the Yeerks have infested an entire hospital staff and are using them to turn patients, as well as their state's governor, who is a Presidential candidate, into Controllers, the Animorphs decide that fly morph would be perfect to infiltrate the hospital. Later in The Warning, Tobias acquires a fly morph.

"A fly moves at about four miles per hour. Which doesn't sound very fast, compared to a falcon hitting almost 200 miles per hour. But trust me, when you're only an eighth of an inch long, four miles an hour is like warp factor nine. And what's really cool is you can do that going down, going left, right, or straight up. And you can change directions in no time. One minute you're shooting straight ahead like a bullet, the next tenth of a second you're going straight up."
―Jake[src]

The housefly is one of the most used bug morphs employed by the Animorphs. It is mainly used for escaping undetected or for infiltration and reconnaissance purposes.

Re-release cover of The Capture, showing a lenticular Jake/Fly morph 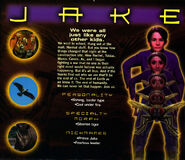 Inside cover of The Capture, showing Jake in fly morph in Cassie's barn
Community content is available under CC-BY-SA unless otherwise noted.
Advertisement