"Over time, the Gedds evolved. They were a sort of... like a monkey, I suppose. We were in the Gedds till the Andalites first came. Some of our people still have nothing better than Gedds for hosts."
―Temrash 114 to Jake[src]

Gedds are blue ape-like creatures native to the Yeerk homeworld and were the first species the Yeerks infested. Gedds are an odd race; they have yellow eyes, three-fingered hands, and webbed toes. They're not terribly intelligent, have poor vision, and poor motor skills. Although they have two legs, one leg is longer than the other, so they are unable to balance them and must keep one or both hands on the ground to steady themselves. Their mouths are hard to control, and any Gedd-Controller will have problems speaking effectively.

Because they are slow and inefficient, the Gedds formed a symbiotic relationship with the Yeerks, who helped them survive in exchange for being hosts. However, after the unfortunate incident of Seerow's Kindness, the Yeerks became greedy and the Gedds became just one of their enslaved races. They are used by the Yeerks not as shocktroops, but as host-bodies for young/low-ranking Yeerks, and are not often mentioned in the series.

A Gedd from the game booklet of Animorphs: Shattered Reality.

Flipbook morph on the pages of The Hork-Bajir Chronicles, which includes a depiction of a Gedd. 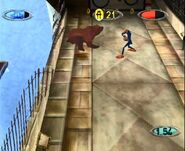