"That blue box represented more power than half the weapons in the world combined. That little blue box could give anyone morphing power."
―Marco[src]

An Escafil device is the technical term for the morphing cube that gives an individual the power to morph. It goes by other names, but is most well-known as the Escafil device, named after the Andalite scientist Escafil, who helped create the morphing technology.

A testament of Andalite's technological advancement, Escafil Device allows the user to morph into other lifeforms. In appearance, it's a light blue cube that is operated by touch contact, and apparently one person, the "giver" who should already have the morphing ability has to touch one side of it, while those receiving the morphing ability touch other sides. When touched, it gives the user the permanent ability to acquire DNA from live animals and change ("morph") into the animal. Once an individual gains the morphing ability, they do not need to use the Escafil device again.

The morphing technology's exact function is not known, but it is speculated to be a vast network of thousands of microbionic units. These units would be contained in the Escafil device, the central computer for the smaller morphing units.

Although the Animorphs had long believed that the Escafil device that Elfangor-Sirinial-Shamtul used to give them their powers was destroyed when his ship was destroyed by the Yeerks, it was later recovered by David, with the Animorphs subsequently reclaiming it. It was briefly used as a power source by the Helmacrons before it was recovered, the Animorphs keeping its location secret due to the dangers of sharing the morphing technology with others.

Ax has disassembled it at times into smaller components, demonstrating that it was able to be broken down. 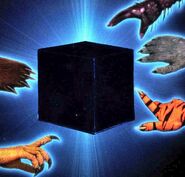 Escafil device as illustrated on the inside cover of The Andalite's Gift
Community content is available under CC-BY-SA unless otherwise noted.
Advertisement