"The Yeerk, the former Visser Four, has used the Time Matrix. He has traveled backward in time and is changing historical events. He's rewritten the past in an effort to bring about a Yeerk victory and give himself greater power. [...] You can attempt to save your reality, put everything back where it belongs, end slavery, replace tyranny with democracy, millions of lives saved, let freedom ring, glory hallelujah in exchange... in exchange for one, single life. [...] The life of one of you. That is my master Crayak's price: One of you must die."
―The Drode to the Animorphs[src]

Megamorphs #3: Elfangor's Secret, published in May 1999 and written by K.A. Applegate, is the third book in the Megamorphs series, a set of companion books to the Animorphs series. With respect to continuity, it takes place between The Sickness and The Reunion. It is narrated by all six members of the Animorphs.

We found out who Visser Four is. And he has found the Time Matrix. The machine Elfangor had hidden in the abandoned construction site. The same place we met him on a night none of us will ever forget. Especially me. Now Visser Four has the Matrix, and he plans to use it to become Visser One.

But Jake, Rachel, Cassie, Marco, Ax and I can't let that happen. We can't let him alter time so that the Yeerks will win the invasion. So we're prepared to make the ultimate sacrifice. And, ultimately one of us will lose this fight...

An actor named John Berryman discovers the Time Matrix buried at the Abandoned Construction Site. Some time after that, he is infested by the Yeerk formerly known as Visser Four, who had been demoted for failing to conquer Leera for the Yeerk Empire. Once in possession of Berryman's body, the Yeerk discovers that his host body was in possession of the Time Matrix and uses it to rewrite Earth's history in order to facilitate his conquest and become the new Visser One.

Using the Time Matrix, Visser Four creates a timeline in which modern day Earth still practices slavery, with Cassie being a radical slave-owner who opposes war, Tobias dating Melissa Chapman, who takes Rachel's place in the group since Rachel was sent to a camp to reeducate and remold her into a submissive as she was deemed too bold and aggressive for a female; Jake becomes a Patriot of the Empire with Neo-Nazi tendencies, hellbent on being referred to as "Supreme Leader" while Marco is a friendless cynic whose mother is still alive and lives with him. The Drode interferes, restoring their original timeline personalities and replacing Melissa with Rachel, offering them the chance to pursue Visser Four, retrieve the Time Matrix and undo the damage, albeit at the cost of one of their lives. He reveals that Visser Four having the Time Matrix is technically their fault, since their actions are what led to the Yeerks' failure to gain control over the Leeran continent, which in turn led to him gaining Berryman as a host. Marco and Cassie are reluctant since they know that the life Crayak would take as payment would be Jake's, since Crayak holds Jake responsible for the destruction of the Howlers and the survival of the Iskoort race.

In order to silence Berryman, who is quoting William Shakespeare's Henry V, Visser Four travels to 1415 in order to kill Henry V during the Battle of Agincourt. As the Animorphs agree to chase the Yeerk, they are immediately transported to fifteenth century France. Marco realizes that the lice-ridden and pockmarked humans of the fifteenth century would make it easier to spot Visser Four's host body, and manages to spot the Visser posing as an English archer. However, when attempting to kill Henry V with an arrow, the arrow is intercepted by Tobias, alerting the Visser to the fact that the "Andalite bandits" are chasing him. Marco, Rachel and Cassie are nearly killed in the war among the English and the French, but are saved by Tobias and Jake, with Tobias in Hork-Bajir morph and Jake having acquired and morphed one of the French war horses. Ax chases the fleeing Visser through the air in his northern harrier morph but is forced to demorph, igniting the wrath of pitchfork-wielding citizens. Tobias and Jake come to his rescue, with Tobias and Ax storming into the church where the Visser has fled. Tobias chases him to the bell tower, where he has hidden the Time Matrix, but the former Visser Four escapes, fleeing to the Delaware crossing in Trenton, New Jersey.

Visser Four arrives in Trenton in 1776, where he warns the British and the Hessians about George Washington's ambush. Fearing that the Yeerk might be attempting to assassinate the "Father of [their] Country", Jake orders the Animorphs to protect Washington at all costs. Jake and Marco, in their human forms, join one of the boats while Rachel and Tobias take to the air, Cassie electing to morph dolphin and stay hidden in the Delaware River while Ax remains on standby in Andalite form. During the firefight, Jake is shot in the head, destroying the back part of his head and instantly killing him. Enraged, Rachel takes command over the group and orders Ax to kill the Hessians. Although Ax protests that it was not their fault and they are not his enemies, Rachel pressures him to do his duty since his prince was killed. Ax decapitates the Hessian commanding officer just as Visser Four time jumps once more, this time to 1805, at Cape Trafalgar.

The Animorphs end up in nineteenth-century Spain, where Rachel, Marco and Tobias chase the Visser; Rachel almost catches him in chimpanzee morph, but she is blown in half by a cannonball and killed. Enraged, Tobias and Marco pursue him as he flees into the ship, with Tobias ripping his ear off and Ax joining them, although he manages to cause the ship to explode before escaping through time once again.

Visser Four flees to Princeton University in 1934, where he plans to kill Albert Einstein. However, his prior meddling in the timeline prevents Einstein from being at Princeton; additionally, his actions at the Delaware River crossing prevented the United States from being formed, and so the United States is now a British territory with ties to France. The Animorphs also follow him to Princeton, where Tobias regroups with Cassie. There, they come across a racist student, who refers to Cassie as a runaway colored slave and uses a racial slur. Cassie then morphs into a polar bear to "turn white" and threatens him, before Rachel, Marco and Ax show up. Tobias is surprised that Rachel is alive and kisses her, while Ax theorizes that since the deal was that one of them had to die, the Ellimist most likely stipulated that only one could die, thereby making the other Animorphs immortal for the rest of their journey through time.

Desperate to finish his agenda and ditch the Animorphs, the Visser travels to various destinations within seconds, hoping to lose his pursuers. Confident that he has lost them, he travels to Normandy in 1944, intent on warning the Nazi Party about the Allied efforts on D-Day. However, his prior actions have prevented the Nazi party or the Allies from existing, and he is arrested by a German-French team, where Adolf Hitler is but a mere driver. He is arrested and taken away by the German-French troops, but Tobias and Cassie, in Hork-Bajir and wolf morph, launch an attack on the convoy. Upon spotting Hitler, Tobias presses a Hork-Bajir blade against his throat, electing to kill him, while Cassie explains that this Hitler is not the same Hitler from their timeline. The captain fires at Tobias, causing Tobias to jerk his wrist blade reflexively, slitting Hitler's throat and killing him. Cassie and Tobias are then shot, only to have the bullets and wounds disappear due to their newfound immortality. Rachel, Marco and Ax also arrive at this point, with the latter two having experienced the horrors of war on the shores of Normandy. Rachel steals a hand grenade and drops it into one of the tanks, destroying it and killing the German-French squad, while crippling Visser Four.

With Berryman's body crushed at the waist down, paralyzing him, the Yeerk escapes his body, although not before realizing that the "Andalite bandits" are mostly human. As he flees Berryman's ear, Tobias spots it and Marco throws it into a burning tank. Berryman relishes his freedom, praises the Animorphs for fighting against the Yeerk Empire, although he admits he is aware he will die from his injuries. The Animorphs discuss how to erase the timeline in order to bring Jake back to life, and Ax responds that they would have to prevent Berryman from locating the Time Matrix to undo the altered events. Cassie then asks Berryman when and where his parents met, much to the shock of the Animorphs and Berryman, who realizes that he is about to be wiped from existence. Berryman accepts his fate, informing Cassie that his parents met at a certain location in San Francisco in 1967. The Animorphs time travel to the sixties, appearing in front of two hippies, one of whom is Theresa Knowlton, Berryman's mother. By distracting her, they stop her from meeting Berryman's father and thus prevent Berryman's conception. With Berryman effectively wiped out of existence, the timeline is changed, with the Time Matrix still remaining buried and undiscovered while the demoted Visser is given another host body. The timeline's erasure resurrects Jake, and the Animorphs retain their memories of the altered timeline. 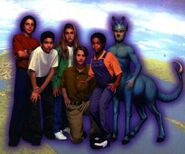 Full cover photo image, from the back cover of the Animorphs Student Planner 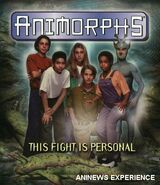 Megamorphs #3 advertised in Nickelodeon Magazine, May 1999. 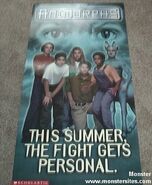 "This Summer the fight gets personal" poster

"This fight is personal" promotional keychain (back)

Ad from inside Book 28