"Dome ships are very cool and typically Andalite. They're built a little like palm trees. There's a long trunk with engines at one end and a bulge for weapons and living quarters in the middle. On top you have a big glass dome over grass and trees and even streams and little hills. The Andalites are a grazing species: They love an open meadow. Dome ships are also exceedingly well armed."
―Jake[src]

A Dome ship is a large combat/transport spacecraft that the Andalites use to travel the galaxy. It looks like a big mushroom, umbrella, or palm tree. The top section is covered in a huge, grassy field based on the Andalite homeworld. The section is protected by a transparent dome to view the stars while the crew members graze; Andalites need to run through a grassy feeding ground and have some wide open spaces for both feeding and general well-being.

The stalk contains living quarters, the engines, and the bridge. Despite its size, it can be assumed that a dome ship's complement is in the hundreds or low thousands as much room is used for housing fighters and for the dome of the ship. A Dome ship can host many fighters, and is such a great combat force that generally only one is needed for an entire battle. There have however been several battles where the presence of two or sometimes even three Dome ships was necessary for victory. In battle, the dome detaches from the stalk, that way it can maneuver faster and fight more effectively. The Dome ship is a major asset for Andalite warriors and is an example of their wonderful technological advances.

Dome ships are also said to possess extremely powerful weapons, the main Shredder beams can punch a hole through a moon the size of Earth's or turn a planet into a cinder.

"The dome of a Dome ship is a circular area about a third of a mile across. It is filled with grass, trees, ground rushes, and flowers. There is a lake in the middle and a stream that runs around the circumference. It's as much like home as it can be. You'd almost think you were running across any well-kept area on the home world. But when you look up, you see that you are in space, protected only by a clear plastic bubble, a dome."
―Elfangor-Sirinial-Shamtul[src]

The Animorphs, morphed as dolphins, come across the dome of the GalaxyTree dome ship on the ocean floor, where they find Ax, who had sent out a distress call. Illustration from the Japanese edition of The Message.

The schematics of an Andalite Dome ship.

Cassie and the Animorphs, morphed as dolphins, discover Ax in the dome of the GalaxyTree on the ocean floor. The domes of Andalite dome ships have trees, rivers, and anything else to remind Andalites of an open field on the Andalite homeworld. Depiction from one of the Animorphs Jigsaw Puzzles. 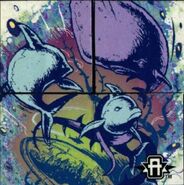 One side of the KFC puzzle cube fast food toy depicts the Animorphs, morphed as dolphins, finding the dome of the dome ship on the ocean floor.