Born in Toronto on December 22, 1982 to proud parents Nicky and Bob, Brooke Candice Nevin craved the spotlight from the get go. At age four, she was enrolled in dance classes learning tap, jazz and ballet. Later she channeled her energies into music (she played the flute for three years, currently plays the piano, and was a member of both her school's choir and the East York Youth choir) and the stage (she made her start in school plays, community theater and talent shows).

Her passion to perform grew with Brooke. She wanted to move from the local stage to the silver screen, however her mother was reluctant. Finally in 1996 she relented after seeing Brooke give a stellar performance as one of fifteen daughters in a production of The Pirates of Penzance. That summer she got an agent and began to audition for professional jobs.

Brooke's first job was as an extra in a Honeycombs commercial. Like many aspiring actors, she discovered background work was neither fun nor glamorous. She wanted a lead role. Through hard work Brooke earned those lead roles in episodes of Goosebumps and Real Kids, Real Adventures. She also appeared in the independent film Short for Nothing and was a lead in the Showtime movie Running Wild. The latter earned her a Young Artists Award nomination.

Then came the role in which many fans first saw her in: 'Rachel' on the Animorphs television series.

During the series' first hiatus Brooke kept busy with supporting roles on various series. She landed parts on Are You Afraid of the Dark?, Twice in a Lifetime, and made two appearances on the Canadian show JonoVision.

Animorphs ended it's run after only two seasons, but fans continued to see Brooke on television in guest roles on The Famous Jett Jackson, andIn a Heartbeat. She also made appearances on two CBS mini-series -- Guilty Hearts and the highly acclaimed WWII drama Haven.

Besides being artistically blessed, Brooke also excelled academically. A graduate of Leaside High School's gifted program (and former co-president of the school), Brooke entered their French Immersion program in sixth grade in which all her classes, except English and cooking, were taught in French. That experience definitely paid off as she is now fluent, both in speaking and writing the language.

After taking a short break from acting to finish school, during which she also spent time studying other aspects of show business such as editing and filmmaking, Brooke moved from Canada to Los Angeles.

Her career in Hollywood had a slightly bumpy start -- guest roles that she filmed on the series 'Skin' and 'dr. vegas' never made it to TV when the shows were cancelled due to low ratings (her lost episode of 'Skin' eventually popped up on SoapNet). However, a rough start didn't hold Brooke back. She then starred in the successful USA Network limited series The 4400 and roles on other popular and high profile shows started rolling in. You may have seen her in Charmed, Without a Trace, Smallville, Everwood, Grey's Anatomy orEli Stone. Her appearance on Supernatural stuck with fans so much that they specifically requested her appearance at the Asylum con

Brooke's page in the book Meet the Stars of Animorphs 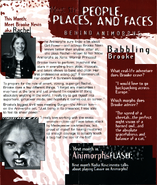 Brooke Nevin interview in Nickelodeon Magazine, October 1997 about starring in the Goosebumps tv show episode 'A Shocker on Shock Street'

Brooke in an article in Sci Fi Teen

Brooke and the half-Rachel/half-lion promotional image, from a Nickelodeon Magazine article 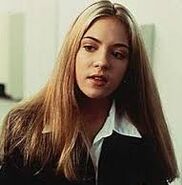 Brooke in the show's opening theme

Brooke and Shawn Ashmore meet fans at either FAO Schwarz or Borders on March 19, 1999. 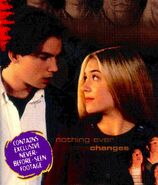 Brooke and Christopher Ralph on the cover of US VHS release Part 4: The Legacy Survives
Community content is available under CC-BY-SA unless otherwise noted.
Advertisement