Boris Cabrera (born December 16, 1980 in Inglewood, California), is a former actor. Cabrera is primarily known as originating the role of Marco in the live-adaptation television series of the long-running book series Animorphs.  He left the entertainment industry in the early 2000s and became a personal fitness trainer.

Interviews and Articles about AnimorphsEdit

Boris in the opening theme

Season 2 theme
Add a photo to this gallery

Boris's page in the book Meet the Stars of Animorphs 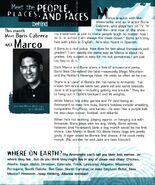 Behind the scenes bio on scholastic.com/animorphs

Boris and the on-set tutor behind the scenes.

Boris on the cover of US VHS release Part 3: The Enemy Among US.
Add a photo to this gallery
Retrieved from "https://animorphs.fandom.com/wiki/Boris_Cabrera?oldid=19722"
Community content is available under CC-BY-SA unless otherwise noted.