The subsequent 3 mailings each contained a newsletter in the form of an AOL-style "chat" among the Animorphs members, ending with a new special password to access the Animorphs Sanctuary part of the web site. These subsequent newsletters measured about 6"x9". When one typed in the password, one could access insider info, downloads, polls, and screensavers of the Animorphs morphing the morphs from the book covers. Later, in 2011 during the Animorphs re-release, cover artist David Mattingly would re-post these screensavers on his youtube channel.

First Chat back side

Poster that measures around 8.5"x11", and is semi-translucent

Necklace with a silver amulet with the "A" logo

These were scheduled to be sent out around the 15th of the month, in April, July, and October 1999. Later, they were scheduled to be sent out April 30, July 2, and October 1. Members could choose to receive them via email or snail mail. The backside of the mailings showed the Sanctuary logo. The end of each newsletter contained a new password for the recipient to use to access the Sanctuary part of the web site, which was scheduled to go live on April 30, 1999.

The Animorphs Sanctuary was advertised in the back pages of the Scholastic edition of book 25, and both editions of book 26 and book 27 with an original sign-up deadline of March 31, 1999.  On the front cover of Book 29, a sticker reminded the reader that time was running out and you needed to sign up before April 30, 1999, which was the extended deadline to sign up. Some recipients of items in the Animorphs Alliance fan club also received advertisements to sign up for the Animorphs Sanctuary.

ad in the back pages of book 27. This ad includes the deadline of March 31, 1999, before the deadline was extended. (This same ad could also be found in book 26) 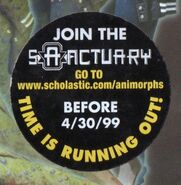 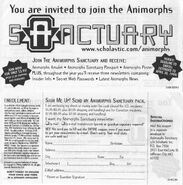 Ad to join the Animorphs Sanctuary, from an Animorphs Alliance mailing (front and back)

The three passwords, revealed at the end of each newsletter, were:

The Sanctuary effectively ended in December 1999, when K.A. Applegate did her first ever webcast. This webcast gave out a new password, "KNOWLEDGE", which could be used to access the Virtual Time Capsule part of the site, which would replace the Sanctuary area (and initially used the same web address including the term "sanct00". The April newsletter says that "in order to access the Sanctuary this year, you will need four passwords". However, the three newsletters only give out three passwords, so the password revealed during the webcast seems to be the fourth password.

There were six total screensavers available for download, one for each character. The foreground would show the character morphing the various morphs on the book covers, and the background would be a large closeup of the character's face, and a bunch of colored clouds. The background closeup of each character's face in these screensavers was the first and only time fans would see the cover models' face shots without half their face being an animal (as seen in the Megamorphs #2 inside covers). If you look closely at the cover model pictures and the MM2 inside covers, you can see the face is the same or very similar, just edited a bit. In 2011 during the re-release, cover artist David Mattingly posted them to his youtube page . (For some reason, Mattingly did not post the Tobias screensaver, so it is not embedded below. However, you can watch it here )

The inside covers of Megamorphs #2, for the four human members of the Animorphs, show the Animorph's face mixed with the features of one of their preferred morphs - Rachel/Bear, Cassie/Wolf, Jake/Leopard, and Marco/Wolf Spider. The base human picture for these images seems to be the same as the face pictures shown in the Sanctuary screensavers - or at least a very similar image, take during the same photoshoot most likely.

Cassie from the MM2 inside cover and the Sanctuary screensaver - looks like the same picture but edited, and she is wearing the same outfit (but with the colors reversed for some reason)

Rachel from MM2 and the screensaver. Compared to the other three, this looks very different

Jake from MM2 and the screensaver. The shirt and hair part are the same, so this is probably the same picture.

Marco from MM2 inside cover and the sanctuary screensaver. These photos look like they are taken from the same picture.