As part of the marketing license by Scholastic, fast food toys were produced for three franchises: 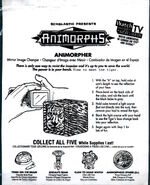 Animorpher bag
Add a photo to this gallery

Released:September 13, 1999 to October 10, 1999
Four morphing figures were produced as toys for age 3+, the Tobias see-through hawk was produced as the Under-3 toy, so it doesn't morph. 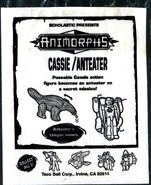 1999 Taco Bell morphing toys advertised on scholastic.com/animorphs
Add a photo to this gallery

Pizza Hut Toys Instructions - these were found inside each bag that included a 3+ toy (the two Anistampers and the two Animarkers, but not the Pool Ship Squirter) 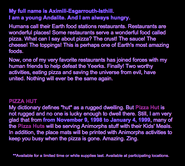 Scholastic.com/Animorphs uses the voice of Ax to remind you to visit your local Pizza Hut for Animorphs Toys. 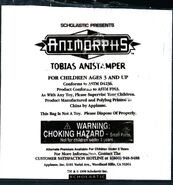 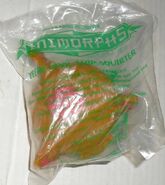 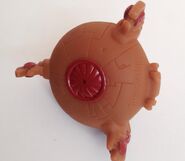 Placemat and all five toys in bags 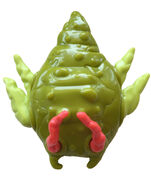 <DON'T BE A YEERK> text stamped by the Yeerk Anistamper

Pizza Hut Table Tent
Add a photo to this gallery

All five toys in packaging

Puzzle on back of DNA transfer cards (KFC)

Retrieved from "https://animorphs.fandom.com/wiki/Animorphs_Fast_Food_Merchandise?oldid=24183"
Community content is available under CC-BY-SA unless otherwise noted.