Seerowpedia
Register
Don't have an account?
Sign In
Advertisement
in: Miscellaneous, Merchandise, Articles Under Construction,
and 2 more

The Animorphs 2000 Calendar was the second and final Animorphs calendar created through Scholastic. It followed the Animorphs 1999 Calendar.

The Animorphs 2000 Calendar was the second and final Animorphs calendar created through Scholastic. It was scheduled to be released on August 31, 1999 [1] and featured twelve months of art from the Animorphs book series, as well as art from a dinosaur poster created to promote Megamorphs 2. The morph illustrations were done by Animorphs cover artist David Mattingly, and the Animation was designed and executed by Yoshimation.

Every day, week, and month of the year is a countdown to excitement with a host of Animorphs, Yeerks, and other aliens from the best- selling series. This wall calendar is bursting with full-color art by series' cover artist David Mattingly. It includes special effects throughout to create moving images! [2]

Jake morphing a fly from the cover of The Capture.

<Don't struggle, Jake> a voice in my head said. <It's pointless.>

Then, a laugh only I could hear. <Put that primitive human brain to work, Jake. Jake, the Animorph,> it sneered. <Jake, the servant of the Andalite filth!>

Then I knew. I knew what the voice was. A Yeerk!

A Yeerk in my own head.

I was a Controller.

Rachel morphing a giant squid from the cover of The Exposed.

My eyes became huge, circular pools of darkness. I had sunk down into the water, maybe fifty, eighty feet, not counting my arms, which extended farther still...Then, as I slowly tested my arms, as the hundreds of suction cups tensed and released, I felt the squid mind rise up beneath my own...
And I was hungry.
So hungry...

Tobias morphing into a rabbit from the cover of The Pretender.

I'd lost a father. Because of that fact, Elfangor had been where he had to be, when he had to be there, to change the lives of five ordinary kids forever. And maybe...maybe...save the human race.

Cassie morphing into a butterfly from the cover of The Departure.

How long had I been this way? What awful agony would my parents have endured? And my friends, did they even know? I tested my wings. Sunlight had dried them. I was what I was. A butterfly. I would live in a world of flowers. I wanted to cry, but my butterfly instincts told me I had work to do. Flowers, loaded with pollen, waited for me to help them live...

Marco morphing into Spawn the cobra from the cover of The Discovery.

I was a worm with a head.

Fortunately, my lungs were tiny snake lungs and couldn't have forced a sigh up through my human mouth, let alone a scream. I am so going to have nightmares about this, I thought....

Tobias morphing into his human self from the cover of The Change.

THE ANDALITE GAVE YOU POWER. USE IT.

I was too insane with terror to figure out what he was saying at first....

<What? What? That's my reward? That's all? You're giving me back my morphing power?>

IT'S WHAT YOU WANTED.

I screamed. <You liar! You cheat! I wanted to be human!>

Jake morphing into a Siberian tiger from the cover of The Attack.

I began to morph, to call on the tiger DNA that swam through my blood. The tiger would be bigger than the Howler. The six of us together in morph can take on anything, I told myself. We can take on anything. The Howler's blue eyes narrowed as we shifted positions. He knew a fight when he saw one coming. But he was fascinated by the morphing. Fascinated and almost jealous, if it's possible to read an expression on a face made of tar with eyes as empty as sky...

Rachel morphing into starfish from the cover of The Separation.

Arm, arm, leg, leg. Here was the gross part: my head was morphing to become the fifth leg. It turns out starfish don't exactly have heads. They have a mouth more or less in the middle, a bunch of wiggly little feet that look like suckers, and five big cone-legs.

That's about it for a starfish. A cockroach, by comparison, is a model of sophisticated design....

Ax morphing into a cow from the cover of The Experiment.

The steer's mind was not docile. Not passive. In fact...I was angry. And with very good reason: There was a bull nearby.

There was also a human, but she did not matter.

I glared at the bull.

He glared at me.

I snorted and pawed the ground....

Cassie morphing into Illim the Yeerk from the cover of The Sickness.

My skin turned slick with a thick coat of mucus. It covered my entire body, oozing from the pores....

And it was over. The transformation complete.

Marco morphing into a Nanook the polar bear from the cover of The Extreme.

Now we were feeling pretty good. Better than we had since arriving here in Popsicle World. We the the morph for this place. Like being a tiger in the jungle or a crocodile in a swamp, we owned this place....

I stood nearly ten feet tall, reared up. I weighed maybe fifteen hundred pounds. And if those numbers don't mean anything to you, think about it this way. I was three feet taller than Shaquille O'Neal. I weighed five times as much as him....I was mighty. I was seriously mighty....

All the Animorphs morphing into various dinosaurs from a promotional poster for In the Time of Dinosaurs.

A final cry of the big dinosaur ended in a gasp and collapsing rattle. The Tyrannosaurus had won. The long-necked dinosaur was done for. Nothing left but for him to drop down on me....

- Megamorphs #2: In the Time of Dinosaurs 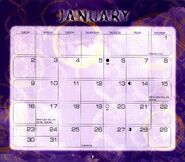 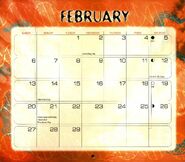 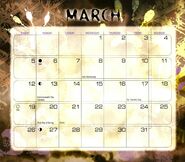 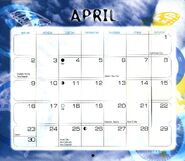 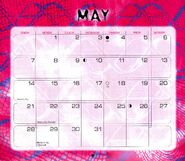 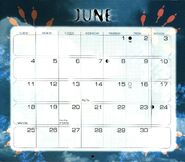 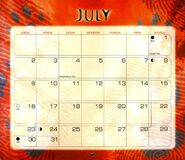 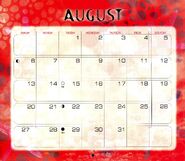 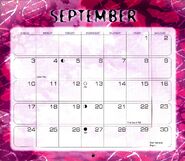 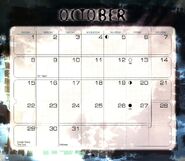 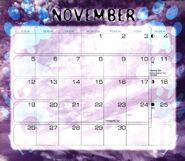 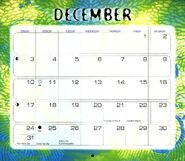 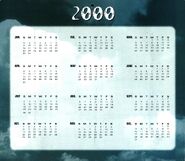 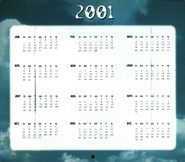 With and Without Decoder Screen[] 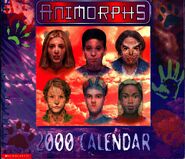 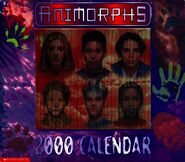 Cover with decoder screen so that you can see Rachel, Marco, and Tobias looking mostly human, and Jake and Cassie looking part animal, and Ax looking mostly Andalite. 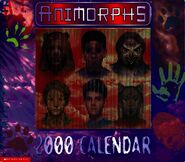 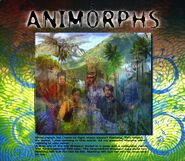 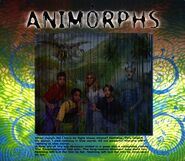 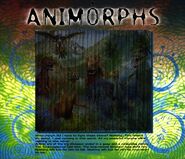 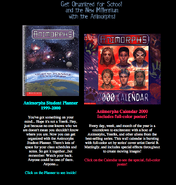 2000 Calendar advertised on scholastic.com/animorphs, showing one of the inside pages and the Animorphs Aliens poster that comes with the calendar.