Seerowpedia
Register
Don't have an account?
Sign In
Advertisement
in: Animorphs Toys and Games, Merchandise, Non-canon material,
and 3 more

In 1999, Hasbro released a small toyline based on the popular Animorphs book series by K. A. Applegate. The line was released under the Transformers brand name, though the two franchises have no relation to each other, story-wise. Animorphs toys were stocked on shelves alongside Beast Wars Transmetal 2 toys, and their presence may explain why the Transmetal 2 series was so small (only 17 toys).

(Each Deluxe toy came packed with a small Yeerk figure in either orange, purple, or red translucent plastic.)

Released in the US[]

Released Only in Europe[] 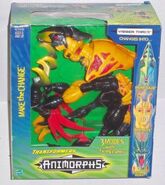 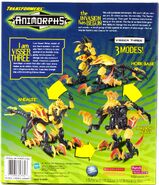 The Animorphs transformers were released in both 1999 and 2000, and were advertised:

Ad for the Cassie/Wolf and Jake/Bear transformers, from the pages of book 28

Transformers advertised on the back of a promotional postacard given out around the time books 26 and 27 were released.

Transformers description and stock images from the 1999 Toy Fair catalog.

Screenshot of the official site at scholastic.com/animorphs advertising the three Mega transformers: Ax/Scorpion, Tobias/Hawk, and Visser Three/Inferno Creature, on October 9, 1999 [1] 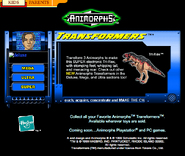