Animorphs: Shattered Reality is one of three games made for Animorphs. It was the only one to come out for the Playstation 1.

Visser Three has obtained a Continuem Crystal that he will use to control reality and tries to use a machine to harness its power. However, he miscalculates its power and the crystal blows up in an explosion which shatters reality itself.

Using a Continuum Crystal, Visser Three attempts to operate a powerful new device specifically designed to wipe out the Animorphs. The first time he tries to operate the device, the crystal pulses rapidly out of control causing a powerful explosion. In the confusion, the crystal vanishes.

But so does the world in which the Animorphs live. The blast disrupted the space/time continuum and shattered their reality. In this new, alternate reality, Visser Three has almost succeeded with his takeover of the planet and Ax is being held captive on a Yeerk ship hovering above Earth.

Your mission is to recover the crystal and reach Ax so he can restore reality to what it once was. As you make your way through each level, you'll find and acquire new animals that will help you in your mission. It won't be easy. Visser Three knows the Andalite bandits are looking for the crystal and he'll do anything he can to recover it before you do. Watch your back--there's danger at every turn. [1]

There are lots of big old baddies who will try to end your mission early.

Visser Three is obviously the most dangerous--especially in his Antarean Bogg morph. But, you'll also have to be on the lookout for the sharp blades of the Hork-Bajir. Don't forget to hold your ears whenever the Howlers are near, and make sure not to trust the swarming Skrit--they're not as cute as they look. In addition, watch out for the deadly Kaa: You'll need to fight a few hand-to-hand battles with these guys. Watch out for their slicing and dicing staffs! The Gedds : They may have a little trouble walking, but they're still powerful enemies. And, any unknown creature that might be Visser Three in disguise.

For the most part of the game, you can only move side-to-side, but in battle, you can move freely in any direction. You have a 2 minute limit for battles, however for most players, this is only a problem for the final battle with Visser Three. Every time you start a level, you pick which Animorph you want to play as. You can choose from Jake, Rachel, Cassie, and Marco. Tobias and Ax are in the cutscenes, but are not playable in the game. You have a set number of lives. If you die, you restart from a checkpoint, but if you lose all lives, you go back to the beginning of the level. You gain extra lives if you get an extra life orb (grey orb) or collect enough Animorph Coins. Checkpoints are the morphing cube. There are eight levels in the game.

One set back of the game is that you can only have one save at a time on the PS1 Memory Card (If you have one). However, at least it has level select so you can replay levels, so other players can go to where they were.

There are three cutscenes, all with very impressive graphics for a PlayStation 1 game.

The first is what plays when you start the game. It is narrated by The Ellimist and he explains the story. The cutscene graphics are also pretty good for a PlayStation 1 game.

The second one happens if you lose all lives, it will show Ax's head being slammed to the ground, and a Yeerk crawling towards his ear, then the camera will look up and shows the other Animorphs standing, and Visser Three nods.

The third one happens when you win the game.

The first level of the game where you travel for a randomly changing world, from machinery above a pit of green goo to hopping on platforms around a volcano.

The second level you spend entirely as a dolphin, trying to avoid traps and obsticles. If you are too slow, you loose the level, for there is a time limit.

This time you are basically in a forest.

Now you are a Dragonfly and it is basically like level two.

This level you are at The Gardens.

Now you have to travel across rooftops and such and more randomness.

The final level, you have to hop on platforms a bit first, then you confront Visser Three in another one of his huge morphs and he is the final boss. For most gamers this is the only time where the 2 Minute combat rule (probubly because of the two hour rule, but no one is going to be in morph for two hours in the game) is a problem.

Marco, Cassie, Jake, and Rachel as depicted in marketing material for Animorphs:Shattered Reality. 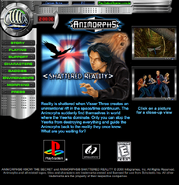 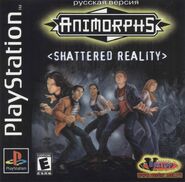 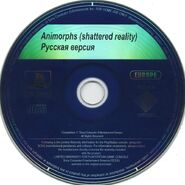 'Take Control' ad for the PC and Playstation game, from book 45

Ad for Know the Secret and Shattered Reality in Nickelodeon Magazine, October 2000