"You will only need to touch a creature, to acquire its DNA pattern, and you will be able to become that creature. It requires concentration and determination, but, if you are strong, you can do it. There are... limitations. Problems. Dangers, even. But there is no time to explain it all... no time. You will have to learn for yourselves. But first, do you wish to receive this power?"
―Elfangor-Sirinial-Shamtul to the Animorphs[src]

To acquire is to gain the DNA of an animal or living creature through physical contact.

Before morphing an animal, one must make physical contact with the animal and acquire its DNA. Acquiring is accomplished by touching the animal and concentrating on the creature. It does not appear that acquiring DNA can occur passively. When one acquires DNA from an animal, the animal commonly enters a type of trance state where they are docile and sedated, although there have been exceptions, such as when Tobias attempted to acquire a dolphin and was constantly dragged underwater as it kept swimming while he acquired it.

This Cassie bookmark has the word <ACQUIRE> on it 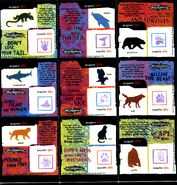 In a KFC fast food toy, you "acquire" the dna of an animal by pressing your thumb to the animal icon (which is kind of a mini stamp pad)